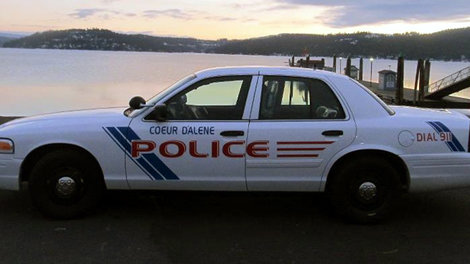 David M. Barger, 69, of Coeur d’ Alene, Idaho is a neck cancer survivor whose weight, according to Coeur d’ Alene Jail’s finest, is 108 pounds. He stands 5’8” tall and is cold most of the time. His is a daily struggle to swallow dinner without choking; his feeding tube disappears into his stomach and has become a tripping hazard at best.

I got to know David while listening to him call in on Henry Shively’s radio show, From the Trenches World Report.com for the past year. David is very intelligent and is a political activist in his city. In fact, he is so well known by the community that people smile when he politely greets them and listen to his high-end vocabulary and knowledge of political happenings. Some find him too difficult to understand. According to David, others find him a nuisance to eliminate, if necessary.

Being this politically active has placed him in the cross-hairs of the local courts, prosecutor’s office, police, and possibly, Homeland Security. David always carries a pen and notepad and his mind works like a digital tape recorder. An example of his colorful vocabulary: “prestitutes.”

Why would this reporter be interested in writing about an Idaho resident one state away from Washington?

In the past five years there have been many stories circulating across the country regarding police using excessive force to arrest, if not taze or outright shoot suspects in Seattle. Additionally, the perception of a police state developing across the United States of America has been reignited in the minds of the public that the police are sworn to protect. The answer? If this incident can happen in Idaho, what city is next?

February 06, 2014, a person in a small grocery store in Coeur d’Alene called 9-1-1 to report ‘a creepy old man hanging out by the phone booth outside’ – a threat necessary enough to ask for police rescue.

The ‘creepy old man’, David, had just tried to use the public payphone. In the seven-degree weather he jammed his hands into his long overcoat to stay warm.

Two police officers arrived and saw David ‘walking up the middle of the street’ and had ordered him to stop. Being deaf in one ear, David did not stop and kept walking. The police officers followed him on foot and by patrol car. At some distance, one officer felt that David was ignoring a lawful order to stop and grabbed him by the arm, taking him to the ground. David would not let go of the ball point pen that he was clutching in his pocket. Officers perceived that it might be a weapon used against them and broke it in half. David went stiff due to having been attacked from behind, all the while worrying about the feeding tube being accidentally ripped from his stomach. The officers handcuffed him and booked him into jail for resisting arrest and wrote him a ticket.

David claimed that he was denied adequate medical care while in the slammer and was appointed, in his words, “a public pretender.”

As of March, 2014, he is being forced by the court to enter a plea of guilty or not guilty. His attorney might want him to plead guilty and get off without a fine or a blemish to his spotless police record.

He wants to fight back, “due to the principal of the thing” and the use of “excessive force” by Coeur d’ Alene’s finest.

Luckily, the Area Agency on Aging of North Idaho has assigned a caseworker to David’s case. These folks work as advocates for the elderly. David’s caseworker is an ex-police officer. He agreed with me that the situation could have been better handled by the Coeur d’Alene officers. Though the police claimed that David’s ballpoint pen might have been used as a weapon to hurt the officers, both of us came to the same conclusion. David’s pen was mightier that the officers’ swords or judgment. As the caseworker related, “Never get into an argument with people who buy ink by the barrel.”

Messages left with the prosecutor handling this case, Wes Summerton, suggesting that this case be dropped, were not returned.

Make sure to call Wes Summerton, Criminal Prosecutor for the City of Coeur d’ Alene, Idaho, and DEMAND that he drop all charges against David M. Barger.

The prosecutor’s office number is 208-769-2323 and press 1. He is out of the office in training until Tuesday, May 14th. However, he does have voicemail. His e-mail is: CDAPROS@CDAID.Org