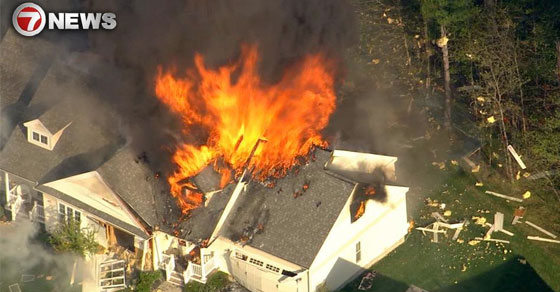 This post,  shared by Christopher Cantwell, was originally published at ChristopherCantwell.com

Well, that escalated quickly. One police officer, and one “suspect” are dead after what began as a domestic argument Monday in a 55 and older community in Brentwood, NH, ended in a gun fight and exploding home.

86 year old Walter Nolan lived on Mill Pond road with his son Michael, reports the Boston Herald. They got into some kind of argument, some time around 4:00 PM. Rather than ask if everything was okay, a neighbor decided to call the most powerful gang in town, the Brentwood Police. Predictably, this did not improve matters any.

Part-time Brentwood police officer Steve Arkell arrived on the scene shortly after, but apparently Michael Nolan didn’t want his “help.” Arkell, a 48 year old father of two, was shot to death as he entered the home, presumably without invitation. A second officer arrived on the scene, and also entered the home, but fled when he was met with what has been described as “rapid gun fire.”

Police flooded the scene, as an as of yet unknown cause started a fire inside the home, resulting in an explosion. The suspected shooter is believed to have died in the blaze. His father was taken to the hospital for as of yet unreported injuries.

That’s about the summary of the available facts reported by the media so far, but allow me to speculate.

New Hampshire is a place with little gun control, and as a result, there is very little crime, at least in the private sector. As I read New Hampshire news, it seems like every time I hear about gun violence, the police are involved, and it usually involves them entering a home without the consent of the home owner.

I don’t know the Nolan family, but according to neighbors, they weren’t dangerous people. Susan Hughes told the Union Leader that Michael Nolan “never really talked to anybody; he stays upstairs with his TV on.” James Culbertson, 73, said the elder Nolan “seemed like a nice guy.” The Union Leader reported that Walter Nolan’s wife died two years ago, and Michael Nolan’s died of cancer in 2008.

So how do these seemingly normal people find themselves in a gun fight and exploding home? Obviously, it’s because the great escalators showed up. Some busybody neighbor hears an “argument” and thinks this is a really great reason to dial 911, knowing that the most violent people around (the police) are going to show up. Said violent people show up, enter the house with a gun, without permission, and surprisingly enough, these folks who didn’t ask for help, aren’t so happy about this.

For whatever reason, maybe he’s irrational because he’s in a heated argument, maybe he genuinely doesn’t know it’s a cop, maybe he’s rightfully fed up with police breaking into homes, the guy in the house opens fire on the cop, killing him. Once this happens, he knows his life is pretty much over. He knows that more police are going to come, and if he’s lucky enough to survive the ride to the jail, he’ll probably never leave. Faced with this horrific scenario, setting his home ablaze and taking his own life starts seeming like a reasonable alternative.

From the Houston Chronicle;

“The entire State of New Hampshire is in mourning over the tragic loss of Brentwood Officer Steve Arkell,” Gov. Maggie Hassan said in a statement. “Officer Arkell bravely answered the call of duty and made the ultimate sacrifice, a heroic demonstration of his commitment to the safety of his fellow citizens.

“Like so many of our first responders do on a daily basis, Officer Arkell courageously put his life on the line to protect others, and in doing so, was tragically taken far too soon,” she said.

As a New Hampshire resident, I couldn’t disagree more. I mourn the loss of Michael Nolan. I mourn the injuries of his father. I’m upset about the property damage. Not the loss of Officer Arkell’s life.

Steve Arkell would be fine if he had taken a job as a construction worker, or a computer technician, or as a fast food cook. Instead, he decided to walk into a stranger’s home with a weapon, and turn a simple argument into a gun fight and exploding home. If Arkell had not shown up, this story would probably not even be worthy of news coverage, just another spat between two widowers in a retirement community.

So the next time you’re thinking of calling 911 because your neighbors raise their voices, ask yourself if it’s worth all the death and destruction that so often follows these marauders around.