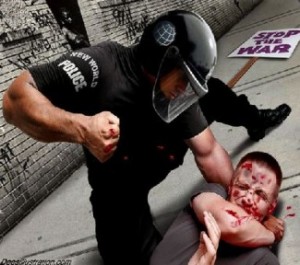 I called the cops to report a crime which happened to me long ago, a crime that is not subject to a statute of limitations. The dispatcher informed me that the cops would be over to take my complaint. When they arrived, I let them in, expecting help. However, they asked me if I had any weapons, to which I answered no. They asked if I had used any drugs that day, which I had not. They inquired about whether I had a job, to which I answered no. They wanted to know, was I married? “Yes,” I responded.
Then, I asked what all that had to do with taking my complaint.

One of the two cops who was then rooting around my home asked about how I was supporting myself. I said, “None of your business.” He said, “Okay, we’re going to take a ride now.” My response was, “What the fuck?” He told me, “You are lacking too many things in your life.” AKA, I might blow my brains out. There was absolutely no evidence of imminent harm to myself or others. They threw me down on the kitchen table, handcuffed me, wrenched my torn rotator cuff, dragged me out in handcuffs in front of my neighbors, all while telling me I’d done nothing wrong. They would not let me get my keys or lock my door or take medicine for the panic attack they created. I sat inside a cop car for 45 minutes while all of my neighbors walked by. Nobody stood up for me, of course. Then, it was off to the hospital for eight hours until I was released because obviously I was no threat. After this incident, the hospital sent me a bill for $4,000.