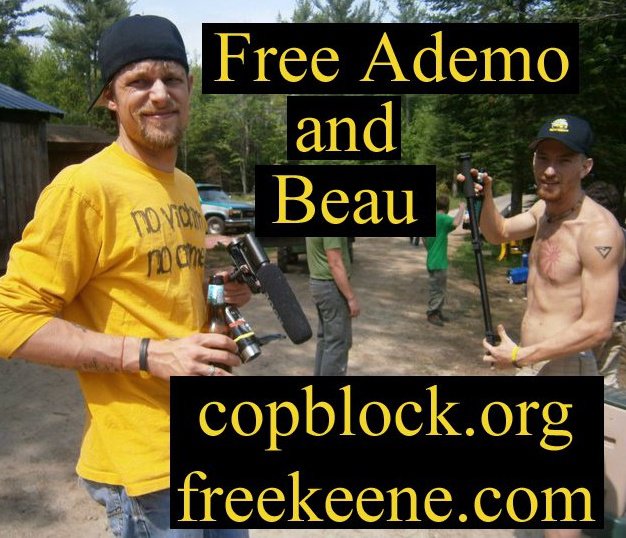 BOTH ADEMO & BEAU ARE OUT!

OVERVIEW
Yesterday Beau Davis was held in “contempt” for not removing his hat when ordered by a stranger named Ed Burke in Keene district court. He was told that he’d spend the next five days in a cage. For what? Where’s the victim? Thus far Ron Dunn, the “bailiff” who initiated the interaction, has failed to express remorse for his actions.

This morning CopBlock.org founder Ademo Freeman went to Keene district court to discuss Beau’s treatment with Ed as he walked into his office. When they reached the second floor where the office was located, Ed ordered other men with guns to “arrest” Ademo. They obeyed.

A moment later Derrick Horton, who had been doing “Don’t Take the Plea” outreach on the first floor, was handcuffed as he stepped onto the second floor to try to hold everyone accountable through his camera.

Ademo was alleged to have acted with “Improper Influence” RSA 640:3 – a “Class B Felony” and is currently at Cheshire Co. Jail until his “probable cause hearing” on July 7th at 9am in Jaffrey, NH. His captors have issued a $5,000 ransom and they stole his camera.

Derrick was processed, given a “violation” for filming, and released. His “crime” was filming in the lobby, which many, including myself, did yesterday. A bit arbitrary. Don’t you think? That’s the difference between natural law and man-made legislation.

UPDATES
2011.06.29 12:00pm EST: Thus far $230 has been raised through CopBlock.org/Support to help Ademo.
2011.06.29 1:00pm EST: Please call 603.271.2521 then press “5” for to reach Don Goodnell, “director” of Admin. Offices of the Courts, to demand the release of the surveillance footage taken at Keene district court on Tuesday, June 28th.
2011.06.29 1:20pm EST: Ademo & Derrick’s arrests noted in New Hampshire Sentinel “Adam M. Mueller, 28, of Keene was arrested after an encounter with Keene District Court Judge Edward J. Burke in the court lobby, according to Keene police Sgt. Christopher L. Simonds. Simonds didn’t know what transpired between Mueller and the judge, but the judge ordered a bailiff to arrest Mueller, he said.”
2011.06.29 2:15pm EST: Yesterday Pete Eyre was told it would take 24-72hrs to “classify” Ademo at jail, after which time he could have visitors. Kate Ager just called and was told it would take up to four more days.
2011.06.29 2:20pm EST: Strategy brainstorming meeting created for tonight at 6pm at the Keene Activist Center.
2011.06.29 4:00pm EST: Richard Van Wickler returned Pete Eyre’s call and informed him that Ademo was done being “classified” and would be moved into general population after his health assessment. Pete and Kate plan to visit Ademo at 6pm.
2011.06.29 5:00pm EST: Pete Eyre spoke with Ademo on the phone. A video from that conversation will be up tonight, after Pete returns from visiting Ademo at jail but briefly, Ademo noted that Beau was going to be released tomorrow (Thur.) morning, rather than Fri. for “good behavior.” He also encouraged those so-inclined to donate a buck or another set amount per day that he’s caged via CopBlock.org/Support.
2011.06.29 8:oopm EST: Kate Ager to to “judge” Ed Burke: Release Ademo & Beau video made live (see below).
2011.06.30 10:30am EST: Beau Davis is free(r)!
2011.06.30 11:00am EST: Pete Eyre and Kate Ager went to Keene district court and requested all documents/media/content related to the arrests of Ademo Freeman, Beau Davis and Derrick Horton. They left with some documents related to Ademo – a complaint, assignment order and order of commitment. The other documents will be mailed.
2011.06.30 12:00pm EST: Help us get footage from Ademo’s camera – it’ll prove his felony charge absurd. Call prosecutor Chris McLaughlin and tell him to do what’s right: 603.357.9815 (then press #1).
2011.06.30 12:10pm EST: “Adventures in Statism Full” video captured on Derrick Horton’s camera by Derrick and Jason Repsher added to thread (see below).
2011.06.30 1:45pm EST: Pete Eyre mailed a Freedom of Information Act letter to Edwin Kelly, 107 Pleasant St., Johnson Hall 3rd Fl., Concord, NH 03301 to obtain all related documents/video/content. The “state” is supposed to respond within five days.
2011.06.30 5:00PM EST: Ademo is free(r)!! Check out the video above to hear in his own words how it went down.

Help keep Ademo going – visit CopBlock.org/Support
Donations will be used however Ademo best sees fit. If we raise enough to bail him out and he wants to be bailed out, he’s out. Otherwise any donations received may be used to help cover the costs incurred by going pro se, projects, food, etc.

Call those involved. Let them know that they’re responsible for their actions. It’s not right to initiate force against a peaceful person.
Chris McLaughlin – 603.357.9815 ext. 1. – prosecutor [tell him to turn over the footage from Ademo’s camera – it’ll prove his felony charge absurd]
Ed Burke – (603) 352-2559 – “judge” Keene district court [communicate that you do not condone his rights-violations of Ademo, Derrick and Beau]
Richard Van Wickler – (603) 903-1600 – “superintendent” Cheshire Co. Jail – [ask his thoughts on the situation and note that he himself is culpable since he’s keeping a peaceful individual caged]
Timothy K. Peloquin – (603) 357-9813 ext. 7029 – Keene PD “officer” who signed “Improper Influence” complaint against Ademo [inquire if he thinks Ademo deserves to be in a cage for nine days or if he can identify a victim]
Don Goodnell – (603) 271.2521 ext. 5 – Administrative Office of the Courts, director [encourage him to be transparent and release surveillance footage from building]

The overview below was written by Kate Ager (a friend, and one of the eight arrested outside Manchester PD).
I woke up this morning (Tuesday June 28, 2011) to a Keene 411 text message alerting me that, “Ademo Freeman just got arrested at city hall,” so I went down there. When I arrived, I passed Jason Repsher downstairs who was doing Don’t Take the Plea outreach and proceeded to the second floor where the first thing I saw upon opening the door was a Keene Police officer grabbing Derrick Horton’s arm; he was ordered to put his camera on the counter, placed under arrest and taken into a back room.

Ademo, who was being held in the conference room, was taken to a room off to the side where I could see him through the window and spoken to by multiple police officers. After their encounter, Ademo was taken to the Keene Police Department. Jason Repsher stayed at the Keene District Court to watch Derrick’s proceedings while Rich Paul and I went to the police department to gain further information about Ademo.

At the police department, the woman at the front desk said that she did not know any information and would speak with the arresting officer when he was free for a moment. We checked in with her multiple times, but she did not follow through. About forty-five minutes after arriving, I was standing outside with Rich and Jason, when Officer Short drove into the parking lot and informed us that Derrick had been transported to the police department and would be released shortly, and Ademo was being charged with a Class B Felony, Improper Influence [*].

Ademo’s charge was based off of asking judge Ed Burke questions on his walk into the building regarding caging peaceful people, such as Beau Davis, for wearing hats in the courtroom. Derrick was released with a violation for filming. Twenty minutes later, we were told by Officer Rivera that in half an hour Ademo would see a judge other than Burke, because of the conflict of interest, at Keene District Court.

I parked at the courthouse and saw Ademo in the back of Officer Peloquin’s cruiser, so I was able to exchange a few words with him on the way to the second floor. Judge Lane ‘oversaw’ the bail hearing/arraignment and decided that “the state,” who brought up prior arrests and that Ademo is on bail for the chalking incident on June 4th in Manchester, had made a convincing argument. Ademo argued that he has never missed a court date and should be released on signature bond, but bail was set for $5,000.

At his request, Officer Peloquin turned Ademo’s property over to me – except his video camera. When Ademo was taken out a side exit and put into the Sheriffs vehicle, I left through a different exit and watched as they drove away. A bailiff whom had followed Ademo and the officers outside apologized to me, telling me that he was “sorry for what I had to go through in there” and to call or come speak with him in a few hours to find out Ademo’s court date and the location where it will take place.

The bailiff should not be apologizing to me, he and his colleagues should be apologizing to the person(s) whom they actively aggressed against. Ademo was taken to Cheshire County Jail awaiting a probable cause hearing which is to take place at 9:00 AM on July 7, 2011 in Jaffrey District Court.

Pete and I went down to the courthouse around 3:30 PM to inquire further about Ademo’s hearing. The bail hearing this morning was also an arraignment – I learned thatt with felony charges a plea can not be submitted; not guilty is submitted automatically by the judge. Pete got the phone number of who to call in Concord regarding getting a copy of the footage taken today by the surveillance cameras in the courthouse. Ademo was filming his encounter with Ed Burke but his camera is being held, presumably as evidence.