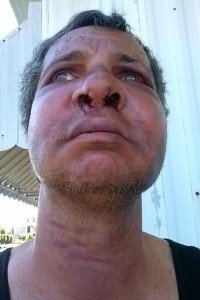 On May 22nd, my papa, a U.S. veteran and grandfather of six, was outside of an express car wash with a friend when Officer Cromwell came to do a routine stop (harass) and the encounter turned violent. Officer Cromwell unlawfully tried to make an arrest and my grandpa complied while the cop tried to say he was resisting. It turned into a fight; Cromwell called for backup. Backup showed up AFTER Cromwell had handcuffed my grandpa. They began to beat him with his hands behind his back. Not only were they punching his face, but they kicked him in his ribs repeatedly; they also managed to give him a few blows to his head with a baton. After the three minute long beating was over, Cromwell uncuffed my grandpa and said, “Don’t worry, he’s not going to do anything now.” The worst part is that the backup who showed up was ten units of Manteca gang unit, dressed in regular clothes, with no badges.

After the ambulance took my grandpa to the hospital, they took care of him for two nights, then released him. He was never charged with ANYTHING, and he was never booked. On top of all of this, it leaves so many questions. Why is it that they never tazed or pepper sprayed him?  Why does my grandpa have handprint-shaped bruises on his neck, and bruises, cuts, and welts all over his back and the back of his head? He even has road rash on the side of his face! Those police who handled this were cowards just looking for someone to pick on that night.