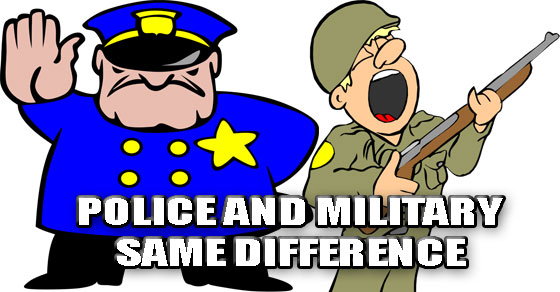 Yesterday I posted an article to the Cop Block Facebook page that was very anti military. I later removed the post due to overwhelmingly negative feedback from users. It was after all, sort of off topic for Cop Block. Still, it would seem that even those among us who have figured out that police are nothing but the violent malicious enforcers of the politicians, seem to hold a soft spot for the military.

Think about it folks; if you read this blog on any sort of regular basis, if you read Cop Block, you know that government, all government, is tyranny. The best case scenario for any government is to be a tolerable annoyance, and I certainly find nothing tolerable about government violence in the United States. The Cop Block website and facebook page is a constant 24/7/365 stream of police abuse, kidnapping, theft, assault, and murder, and that’s primarily just for pointing out when they exceed the “limits of the law.”

Police tell us they are keeping us safe by stealing our money through taxes, by threatening us on the highway, by putting us in prison for possessing drugs, by showing up at a crime scene half an hour after the crime took place. This is such complete and utter nonsense I shouldn’t even have to address it. We know that government lies to us about our victimizers keeping us safe.

The same oppressors tell us the military is keeping us safe from foreign governments, and from terrorism. Anybody who has bothered to turn off their television for an hour a day can tell you this is just as ridiculous. There is no threat to the United States, but that which the United States creates. The constant interference in foreign affairs is what draws the ire of foreign governments and terrorist organizations to us.

They don’t “hate us for our freedom” and if that were the case they would go to any one of a dozen countries on Earth that has more freedom than the US. The top six nations on the Heritage Foundation’s economic freedom index are Hong Kong, Singapore, Australia, Switzerland, New Zealand, and Canada. None of these nations are major players in the military business, they tend to mind their own business, and have a lot more freedom than we do in the United States. The United States doesn’t even make the top 45 nations on Earth for press freedom, yet it spends more on it’s military than all the top 45 nations combined. We can see very plainly here that militarism has a very negative effect on freedom. Hell the only charts the US tops anymore are per capita incarceration, and military spending. If anybody was protecting your freedom, it would stand to reason from these stats alone, that they are doing an absolutely terrible job.

If all these other countries wanted to take our resources, then why wouldn’t they attack one of the other top ten most resource rich nations on Earth? Why don’t those countries find themselves in perpetual warfare? Why aren’t they 41% of the world’s military spending? Simple. They aren’t interested in provoking foreign conflicts like the United States.

“If Tyranny and Oppression come to this land, it will be in the guise of fighting a foreign enemy.” ~ James Madison

Troops do not defend freedom, troops follow orders. To understand that, maybe we should address what freedom is.

Freedom is not something provided to you by a government. Freedom is a distinct lack of something, more specifically violence and coercion. Now, for certain you can lose your freedom by being held captive by some private party. You could be enslaved and kept in a dungeon somewhere by some deranged sociopath. However, when we talk about how free a people are, the common parlance is discussing government. In this context, freedom is a distinct lack of government interference in your life. It is taken away by laws, and taxes, and regulations, and really any government activity that is not explicitly there to repel some other threat.

In order to take away your freedom, it helps if most of your neighbors consent to the invasion on your life. When government wants to control more of your life, they make up insane stories about how there is some threat to us all, and how the only way to repel this threat is to search your vehicle, steal your money, and put you in a cage. Making up lies about foreign threats is part of the same exact business. When they tell us “Islamofascists” are going to take over America and institute Sharia Law, this is just plain ridiculous, it has absolutely no basis in reality whatsoever. It should be taken no more seriously than Reefer Madness and the war on drugs. But just like Reefer Madness and the War on Drugs, the War on Terrorism is touted by TV propagandists, and despite 13 years of repetitive nonsense propaganda being disproven by rational outlets, people still take it seriously.

When these soldiers sign up and go to these foreign countries, are they keeping you safe? Are they protecting your freedom? No! Absolutely not. There is no threat to you over there, they are just acting as world police. Just like the cops abuse, kidnap, rob, assault, and murder us here at home, soldiers go into foreign countries and inflict similar injuries on a foreign people, and with far fewer restrictions on their behavior. They kill and destroy and kidnap and pillage for the singular purpose of expanding the influence of the same government that is oppressing you at home.

They might have signed up with noble intentions, they might have thought they were doing a good thing at first, but so did your local cop. The road to hell is paved with good intentions, and frankly, once you begin doing terrible things, you lose your claim to noble intentions. You can’t kick down the doors of complete strangers and drag them out of their homes and kidnap or murder them, just because someone else told you to, and still say you’re being a good person. That’s not how morality works, and geography is no excuse.

So if they’re not keeping you safe, if they’re not protecting your freedom, what possible reason could they be doing all these terrible things for? For the same reason as your local police – for money, and for power, and for respect. They will do absolutely anything they are told to keep their jobs. When asked directly, most marines said they would fire on American citizens if they were ordered to during a federally ordered gun confiscation. We’ve already seen National Guard disarming people after Hurricane Katrina, and saying they would shoot Americans. We’ve already seen martial law in Boston.

Little by little, the tactics and equipment of the police and military are becoming indistinguishable. Why does Concord, NH need an armored personnel carrier? Well, because Free Staters are terrorists, of course, and they have to fight a war on terrorism, just like the military does. There’s no crime in Concord, NH; this is a weapon of war. Where do they get these weapons of war? Well, from the Federal Government, of course. From the same manufacturers as are making them for the military. Who trains them on how to use these weapons? The military, of course.

Then, many of these police already have military training, because they became police after being in the military. When one is trained for combat instead of a trade, there’s little else they are suited to do besides harass, assault, rob, kidnap, and murder people. This makes the military a prime recruiting ground for police departments. Take this quote from military.com: “Former military personnel hold a special place in the heart of police department recruiters across the U.S. The qualities of a great police officer are virtually identical to those of a great soldier.” Military service even credits towards retirement in most law enforcement agencies surveyed, a very strong incentive for making that transition. There are no solid statistics readily available on what percentage of law enforcement has military experience, but based on various forum posts, the numbers can range anywhere between 10-70% of a department.

To summarize, let’s take a look.

Police: Rob, assault, kidnap, and murder you in the name of “law” here at home. They are paid through taxation (theft). They are increasingly becoming more militarized, taking their weapons, manpower, and training from military forces.

Soldiers: Rob, assault, kidnap, and murder foreigners in the name of “orders” abroad. They are paid through taxation (theft). They are feeding weapons and training to police to make them more militarized. They often become law enforcement officers after leaving the military.