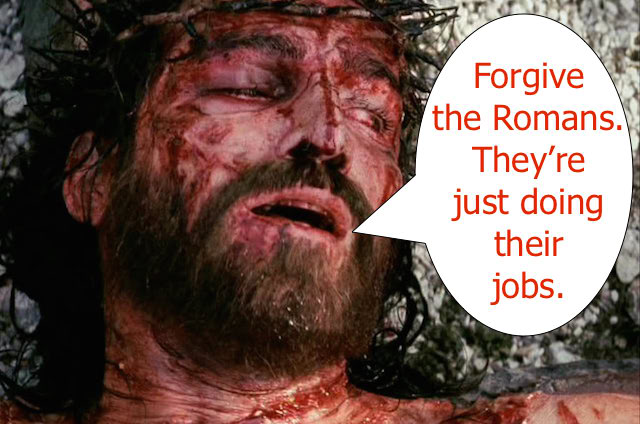 One of the arguments often used to defend poorly behaving police is the claim that they are “just doing their jobs.” This is such an absurdly silly argument that I am surprised that ANYONE takes it seriously.

I will not spend much time addressing the typical response to this most typical of arguments.  This response is the claim that the Nazi’s were also just doing their jobs too when they participated in the mass slaughter of innocents.  Yes, this argument is 100% true, but it hardly seems relevant in the America of today.  Furthermore, using arguments like this may lead us to fail in our attempts to convince others to fight against the arbitrary use and abuse of police power.

Agents of the Gestapo and the SS were indeed following orders when they committed their atrocities, however in many cases, they were forced under threats of violence or death to carry out these acts.  Often times people killed innocent people to prevent from being killed.  This does not in any way excuse these people or these acts, but it does provide us with some kind explanation for why some of these men participated in evil acts.

In America, the situation is different.  Yes, the United States government continually uses force and coercion against its subjects in order to get us to act according to their desires, but America is still a voluntary society in one important manner.  In America, people are not forced to accept jobs that they do not voluntarily choose to take.  This does not mean that we are all employed in jobs that are our first choices, and it does not mean that government acts of coercion have not prevented us from starting new businesses or being employed in the field of our choice.  However, there is no longer a military draft in America and we are still free to reject offers of employment for any reason whatsoever.

This is the key fact which makes the argument that police are “just following orders” or “just doing their job” so absurd.  The police officer who kidnaps a person and throws them into a cage with rapists and murderers  for the “crime” of growing marijuana is indeed following orders from his commanders when he makes said arrest.  However, no one forced the officer to become an officer.  He did not have to choose a career which he knew would lead him to cage humans for participating in victimless activities.  Most importantly, he does not fear that his superiors will hurt or kill him if he does not commit acts of violence against civilians.  We should have no sympathy for the officer who is ridiculed when he body slams a man who is doing nothing but silently and calmly dancing in protest at the Jefferson Memorial, and we certainly should not defend him by arguing thaty he was just doing his job by enforcing the “law.”

In America, we have the right to refuse to be employed by a certain employer if we do not like the tasks that this employer asks us to undertake.  This right is not a secret; every one knows this.  No one is pointing a gun at police officers telling them they have to do things that they do not want to do–in fact, it is usually the police officer pointing a gun at an innocent person and forcing him or her to do things they do not want to do. It says a lot about a person’s character if that person willingly seeks out a job that will lead him to use violence and threats against peaceful people.

Next time someone gets righteous with you and informs you that some police officer was “just doing his job” when he used undue force to subdue a harmless individual, remind this person that the officer chose this job and if he truly did not want to be harming people, he is free to quit at any time.

One of the big problems with coercive monopolies is that the providers of protection (police) do not have to answer to their customers. Costs go up, quality of customer service goes down. A tendency towards reducing crime statistics and increasing arrests arises. The problem today with police initiating force is only one of many symptoms of the larger problem. Coercive gov’t monopoly of services.

It is perfectly normal for people to aspire to go into the business of protection. People that put themselves in harms way to protect and defend should be praised and compensated accordingly.  However, there is no reason why this service cannot be provided privately and funded on voluntarily. In such a system, people who commit so-called “victimless crimes” would no longer be targets for arrest.  Furthermore, officers who abused their powers would be held liable for any harm that they have done.

“If a visitor from Mars were asked to identify the least effective method for securingindividuals’ persons and property, he might well respond that it would be to select one group ofpeople, give them guns, require all members of society to pay them regardless of the quality ofservice they render, and invest them with the discretion to employ resources and determine lawenforcement priorities however they see fit subject only to the whims of their political paymasters.If asked why he thought that, he might simply point to the Los Angeles or New Orleans or anyother big city police department. Are government police really necessary for a peaceful, securesociety? Look around. Could a non-political, non-monopolistic system of supplying policeservices really do worse than its government-supplied counterpart?”