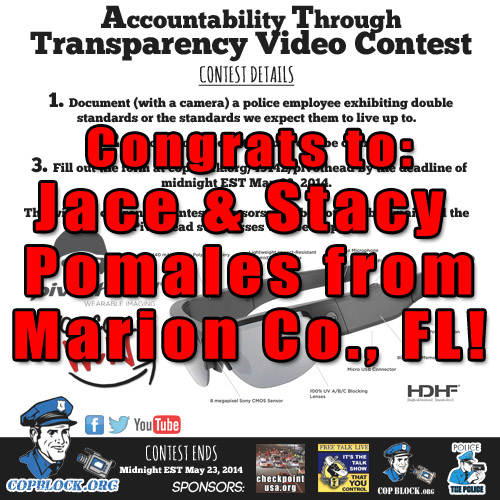 Congrats to Jace and Stacy Pomales, who won the Accountability Through Transparency Video Contest!!

The Accountability Through Transparency Video Contest – announced in late April, sought to lessen the fear of filming the police and thus, help to make its practice more common – accrued almost 60 submissions from two dozen individuals (all included in a playlist below).

As is objectively captured in their video, Jace sought first to inform others of their rights, then was unjustly kidnapped from by Marion County Sheriff’s Outfit employees Lisa Azure #5196, Newbank #5715, and Leedy #5507.

Stacy sought clarification and identifying information from those who took her husband. She remained calm and did not aggravate the situation, yet the trio wearing badges took snatched her up as well. Those present – recognizing just who was in the wrong – vocalized their disapproval to this “service.”

Jace and Stacy, not content to let such rights-violations occur, worked to inform others of the incident, which earlier this week resulted in the threats levied at them in legaland being dropped, those involved being “retrained,” and a civil suit filed.

Definitely worthy of a mention – as it was a close call for myself and the other three reviewing entries – Terry Bressi of Checkpoint USA, Ian Freeman of Free Talk Live, and Jason Bassler of Police the Police – was the stellar video submitted by Daniel Saulmon – Torrance Police – Mandatory Sobriety Testing For Pedestrians. For his efforts – looking out for others stopped by police employees, and for sharing information about tactics and the larger institutionalized violence built-in to the injustice system, we’re going to get Daniel a copy of some editing software.

Third place goes to Drew Huff, who captured and shared How to Handle a Police Officer who trys to detain without cause, which documented how he and his friend Jacob, also active with Ohio Cop Block, chose to remain non-committal to questions posed to them by a police employee when walking down the street. Rather than disclose information, Drew and Jacob asserted their rights, and asked questions, including “Am I free to go?” and “Are we being detained?” Their approach was clearly responsible for the brevity of the conversation, and can only help to make others (in their community, and who see the video) safer. For being quick on his feet, and documenting and disseminating so others can replicate, Drew will get some gear and outreach literature from CopBlock.org/Store

Thanks to everyone who entered the contest and who actively films the police.

Fuel the efforts of Jace and those active with Marion County Cop Block via Bitcoin: 15MWWSxTSFJZ4Bx7QpQ2qkMmubfRY5KG87

Upon learning that his video entry was deemed the best received, Jace wrote back:

How fantastic! This just made our day. I am excited to use these Pivothead glasses and even more excited to post more content with them. Yet another valuable tool in the tool box of Police Accountability. We all know how police act when they see the cameras rolling, but imagine if they didn’t see the camera… Afraid to stand up for my rights? Never. Recording all police activity creates a safer environment by providing an objective record of events for everyone involved and as anyone who has seen my arrest would tell you, had there not been the video, the lies by LEO go unchecked and unchallenged. I’m here to create a safer tomorrow for myself as well as future generations. Refusing to comply with unlawful actions and unconstitutional laws shows others that there are more people out there willing to do what is right and that THEY ARE NOT ALONE.

To help fuel Daniel Saulmon’s efforts, donate to him via Paypal: sales@mistakenbacon.com

For more from Daniel Saulmon:

Upon learning that his video entry was deemed the best received, Daniel wrote back:

It was my pleasure to have the opportunity to enter the competition for the glasses and I am stoked to have been in the running. As you know, the more people that see our videos, the more influence they have on our local police…and hopefully influence the public to record as well.

To help fuel Drew Huff’s efforts, donate to him via Bitcoin: 18noKLp44huaE7iLCmaUi5cA8jWwm9HjG4

Playlist of all Video Entries Received for Contest

After the intro video, the next three videos are the first, second, and third place entries received. The video order after those is entirely random.