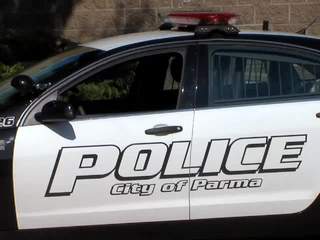 Meet officer Manzo, the Parma officer that cost the city $40,000 in a lawsuit that stated that he hit someone in the head with his flashlight, and then tried to wipe off the blood before internal affairs could get to it! He clearly intended to lie about the events in court, which I’m sure he intends to do when we go to court.

See, he cited me yesterday for holding my “checkpoint ahead” sign, because he claimed it was obstructing police business, because it contained the words, “Turn now.” By the way, it’s the SAME checkpoint sign I have been using for two years now – the same sign I was using last month when the Parma police allowed me inside the checkpoint to film. There was plenty of courtesy last month, but harassment and violation of the first amendment this month! What’s next, are we going to determine that we should be forced to carry ID on us from now on, regardless of whether we are driving or not?

See you in court, officer! I asked officer Manzo about the law regarding hitting people with your flashlight, and his response was, “I guess it’s not allowed,” as if he thought it was before he did it.