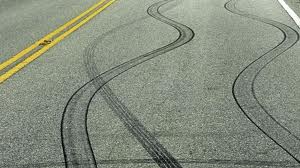 I had an issue with a cop, at 10:40 PM on June 30, 2014 in Hillside, IL. We were hit with a bad storm. I was making a right hand turn at an intersection that had a red light camera. I’m unsure if my waiting for the light to turn green provoked the cop to drive and behave with aggressive driving. When the light turned green, I began to turn right. Halfway into my turn, my vision was blinded by a bright spot light and fog lights on this large vehicle behind me. I was unsure who was behind me as the emergency lights were not on. The mirrors on the side of my car and the windshield were blinding me. I could only make out the top part of the hood of the truck. It was black and large, going very fast and driving very close. I floored it, thinking the vehicle may have lost control and was going to run into me. Moving into the right lane, I looked left and saw that it was a cop. He pulled up in front, speeding, going between 45 mph and 75 mph. The streets were flooded and the speed he was driving was dangerous. Then this truck stopped in the middle of the road. I was terrified, thinking that I was going to have to deal with him now. My car was getting closer to him. I wanted to turn on a different road. I changed my speed and went slower. He was stopped in the middle of the road. I didn’t want to pass him. As soon as I got close, he floored it, spinning his tires and speeding off.

I called Hillside police and got into a heated argument about the police car with plate number 941. They tell me that 911 is for emergencies and that the officer was probably on a call. The cop was dangerous and the way he stopped, he was probably thinking about bothering me. I told the officer on the phone. I started cursing because they wouldn’t help me and apparently getting run off the road by a cop is legal. I spoke to someone else that told me to call the non emergency number. I called this other number an hour later, because I had to find it on the internet. I have no idea why the 911 number is different from non emergency, but they should be able to switch me to the non emergency dept. A dispatch person told me an officer would call me within a few minutes. I got a call from a Sgt. on his cell phone. We spoke for 20 minutes about why this guy drove at me in this way or why it might have happened. He found out that I knew police in the area that went to school with my family, so his tone changed. He knew that I know more than the average person. He slipped up and told me he was driving the SUV with plate 941 and that the camera doesn’t work in the SUV, so if I asked for it in pubic records, it wouldn’t be there.

I’m still upset and afraid to leave my job because he knows I want to complain to his Capt. of Chief. Any advice, anyone? Honestly, I can’t stand by and let these things happen.