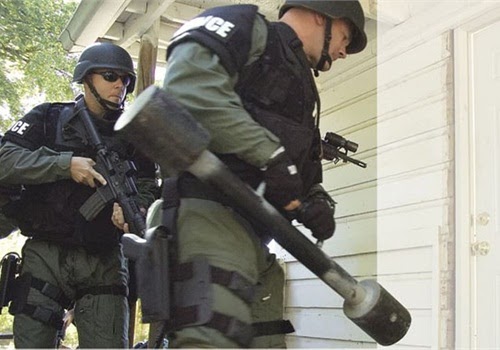 The write-up below, Every State a Police State, was written by Carl Watner in 2008. Though the article makes some references to that specific timeframe (i.e. “the Bush Administration”), the main thrust remains timeless – as Watner concludes, “The only way to avoid the police state is not having a state at all.”

Certainly, whomever is said to now be the “leader” of that criminal racket, only builds on the institutionalized rights-violations of previous administrations – that is, so long as those corrupt institutions remain.

Every State a Police State
by Carl Watner

“With all [due] respect to the differences among types of government, there is not, in strict theory, any difference between the powers available to the democratic and to the totalitarian state.”
– Robert Nisbet, “The State,” (1985)

The following ruminations were sparked by reading a report that enemy combatants, in the War on Terror, may be detained without the constitutional protections normally afforded Americans. Any person – American citizen or foreigner – considered treasonous or a threat to the United States – may be so classified. This means that you or I could be deemed a terrorist for reading this article. (After all, our ideology certainly threatens the very existence of the state.) It is also known that President Bush has ordered, and Congress has sanctioned, the “extrajudicial killing” of enemy combatants anywhere on earth. For example, President Bush in his January 2003 Sate of the Union Address reported the arrest of more than 3,000 terrorists, “and many others have met a different fate. Let’s put it this way. They are no longer a problem.” In other words, “many others” have been murdered at his direction. Whether or not such murders have taken place in the United State is not known, but they certainly could have.

Do these most recent policies by the Bush Administration make the United States of America a police state? Are they similar in nature to the actions of Nazi Germany or Stalinist Russia in imprisoning or murdering their enemies?

To answer those questions: No and Yes. No, because as I wrote in my 1993 article, “In All But Name,” the United States is already a police state. Every state law, no matter how petty or important, has as its final punishment your imprisonment or death – should you decide to resist it to the bitter end. This si true of all states, everywhere, at any time.

Yes, the Bush Administration policies are similar to those of Hitler and Stalin because every state depends on its police forces to enforce its coercive edicts. If a state cannot convince its subject population to comply with its laws, it must initiate violence to enforce its will. The failure to use force will ultimately lead to the breakup of even the most monolithic state.

The reason that I argue that “every state is a police state” is that it is inherently the nature of the state to establish a compulsory monopoly of defense services over a given geographic area. Property owners who prefer no protection, or prefer to protect themselves, or prefer to hire other protective agencies are not allowed to do so. It is also in the nature of the state to obtain its revenues from taxation – a compulsory levy on the inhabitants of its territory. Every state depends on taxation to finance itself. If you don’t pay your taxes you will be imprisoned and/or your property will be confiscated.

The short and long of it is that if you don’t obey state laws, the state will wreak violence on you. The anarchist insight into the nature of the state sees it as an inherently invasive institution.

All you need to know about states is that every state is a police state. Some have more edicts than others; some have fewer – but they all have laws that you must obey or suffer the consequences.

[E]very policeman knows that though governments may change, the police remains.
– Leon Trotsky, “What Next?” (1932)

George Smith once noted that there are three primary criteria by which to measure state oppression:

All government, by its very nature, is coercive. To the voluntaryist, a man is still a slave who is required to submit even to the best of laws or the mildest government. Coercion is still coercion regardless of how mildly it is administered. The point is not what form of government is best, or mildest, or which form of government seems to be most protective of liberty. (Governments cannot be “protective” of liberty because they negate property rights via taxation and compulsory monopolization of services.) The question is: Wouldn’t it be more moral and more practical to provide protection services and all other myriad services that governments provide via voluntary means rather than on a coercive basis? After all, common sense and experience teach that if one takes care of the means that the end will take care of itself. The only way to avoid the police state is not having a state at all.