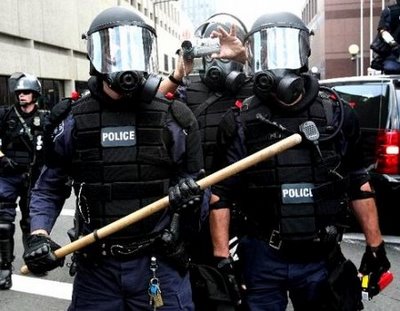 Police are announcing a blitz of forced ‘no-refusal’ blood-draw warrants for drivers this holiday weekend.

As Americans prepared to celebrate independence from tyranny, police in Denver were working hard to lock away locals for harmless possession of fireworks. Fireworks are legal in Colorado, but there are a few cities — Wheat Ridge, Lakewood and Denver — with local bans.

A man was arrested for disorderly conduct and obstructing justice when he refused to stop spraying water on a brush fire that had ignited in a field behind his home.

A popular summer attraction in West Virginia will now be marred its tight security. Swimmers at the famous Dreamland Pool will now have police officers searching their bags as they attempt to use the public facility.

A little-known police tactic allows cops to covertly enter private residences, perform searches, seize property, and then leave quietly without notifying the homeowner. These searches, affectionately known as “sneak and peek” warrants, have been performed at a rapidly rising rate since 9/11.

An innocent family was terrorized when masked, gun-wielding police officers performed a surprise pre-dawn raid on their home. One woman was flung into the front yard unclothed and a 93-year-old grandmother was so badly traumatized that she had to be hospitalized.

Police arrest paraplegic man for considering himself a pedestrian

A wheelchair-bound man was taken to the ground face-first and handcuffed because he rode his motorized scooter on the shoulder of a road against traffic, the way pedestrians are legally supposed to. Police impounded his scooter and took him to jail.

Fernando Davis had been drinking on the night of his birthday and was sent to jail for DUI. He had no idea that his time in jail would lead to him being sent to the hospital as well. Davis received a beating so violent that the toilet in his cell was filled with blood. When Davis tried to claim the officers had assaulted him for no reason he was met with opposing stories from all of the deputies, so he hired an attorney.

A community is devastated after a suicidal teenager was shot to death by police following a family’s call for help.

An unidentified California Highway Patrol officer is under investigation after getting caught on video beating a woman about the head a dozen times with no apparent indication that he was in danger.

Cops Forcing the Homeless to Participate in Drug Training Exercises

Participants in the CA Drug Recognition Evaluator Program (DRE) are reporting that they have been forced to participate in this testing or otherwise face arrest.

According to the police report, neighbor Keith Coleman noticed two male and two female 20somethings he’d never seen in the neighborhood before at [rock promoter Kat] Lynes’ apartment. They were packing up a blue and grey van with Nevada license plates. One of the men, he told police, had a “full bushy beard,” and both had “Middle Eastern appearances.” They were carrying heavy black and red backpacks, and cardboard boxes marked with red X’s that had the word “explosives” on them, according to Coleman.

An Ohio family is reeling after a father was arrested and lost his job because his 8-year-old son explored the neighborhood by himself. He could face up to six months in jail.

Two juveniles were left locked in a bare courthouse holding cell for 3 straight nights with no food, no water, no lights, no toilet paper, and no supervision.

Jailers taunted a young man as he begged for his life, strapped to a restraint chair and suffocating on pepper spray.   The death of the teen was officially ruled a homicide, although the state later concluded that no one should be punished.

Recently a man in Wisconsin was charged and convicted for “disorderly conduct” and “unlawful use of a computerized communication system” after posting a comment on the Facebook page for a nearby police department.

The Unreported PTSD Problem Among Victims of Police State Violence

Post Traumatic Stress Disorder or PTSD has become a popular topic in the news recently, now that the PTSD problem among veterans is becoming impossible to ignore.  PTSD seems to be a rational human response to extremely violent situations.

Just last month, a county sheriff’s deputy in Georgia has been charged with fondling women involved in court cases; a deputy in Colorado was arrested on a domestic violence-related sex assault charge; a police deputy chief in Utah resigned after allegations of sexual harassment; a woman in New York City filed a lawsuit accusing an officer of rape, assault and battery after the officer allegedly pressured her into a date by promising to clear up her case; a former Georgia officer was sentenced to 35 years on child molestation charges after he forced sex acts from two girls and a woman while on duty; an officer in Texas was arrested on domestic violence charges, saying in a recording that his wife needed to be “cut by a razor, set on fire, beat half to death and left to die”; several sexual assault charges were filed against a former California officer who allegedly molested a 14-year-old Explorer Scout; an officer in North Carolina faces peeping charges; a former Arkansas officer plead guilty to five counts of sexual assault of a 16-year-old girl; a former DC officer admitted in federal court recently he forced underage teenagers to work as escorts out of his apartment; and a former Wisconsin police officer, Steven Zelich, was arrested for allegedly murdering two women and stuffing their bodies into suitcases.

A Clayton County police officer, Thomas Sheats, has been arrested and is on leave for a disgusting fit of road rage last week.

A 16-year-old kid was being harassed because a police officer suspected he was privy to the heinous criminal activity of ingesting the smoke of a marijuana plant.

Three Years and Still No Justice for Kelly Thomas

Yesterday marked the three year anniversary of Kelly Thomas’ horrific and fatal beating by six Fullerton police officers. Many gathered at the murder site, now known as “Kelly’s Corner”, alongside his family and friends for a night of remembrance. For those unfamiliar with the case, Kelly was an unarmed, schizophrenic, transient man, savagely beaten to death by the deranged Officers Jay Cicinelli, Manuel Ramos, Joe Wolfe, Kenton Hampton, James Blatney, and Sergeant Kevin Craig.

During the nine minute long attack Kelly pleads with the officers for his life repeatedly while calling out for his father 31 times. He eventually succumbs to the violence and is left in the road dying while medics who arrive are told to treat the minor boo-boo on Officer Ramos’ elbow before even being notified of Kelly helplessly laying there. He never regained consciousness and was removed from life support five days later.

The toddler who was severely injured when police, looking for, $50 worth of drugs, threw a flashbang grenade into his crib, has walked out of the hospital this week! Baby Bounekahm “Bou Bou” Phonesavanh suffered third-degree burns to his chest and face after sheriff’s deputies in Habersham County raided a house in the middle of the night only to find ‘drug residue.’