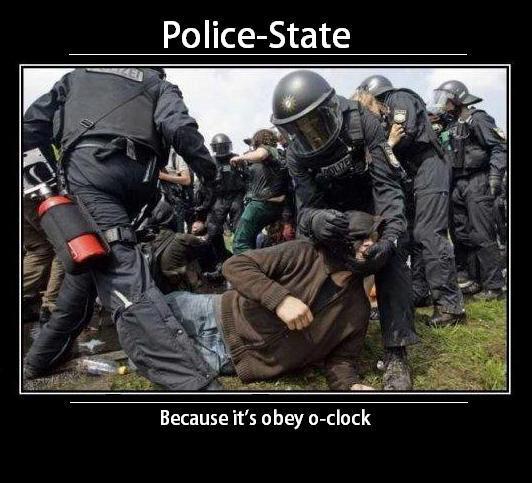 Are Americans a free people or are they not, that is the question. Do Americans still have the right to petition their government for redress of grievances, or do they not?

These questions were answered on the morning of March 10 when this writer received a knock on his door. Outside stood two men, one clad in civilian attire, the other in the uniform of a Muscogee County sheriffs deputy. The first deputy was grasping a small stack of envelopes. “We need to have a word with you sir,” he said.

The envelopes contained copies of an article I had written for The First Freedom, an article that was published in the December, 2013 edition of this alternative newspaper. Almost 200 copies of this article were made, and subsequently mailed, to every judge in Columbus, as well as all 10 city council members. The article recounted the exploits and travails of then-Columbus, Georgia-based white rights activist Michael Weaver, and was juxtaposed with the story of Jeffrey Foxx, a black racist rogue Columbus police corporal who resigned from the police department in May, 2013 amid charges of racial profiling and the violation of the civil rights of white citizens. While on patrol in the northern part of Columbus, Foxx told a female friend to whom he was talking on his cell phone: “They make me work these white areas, somebody’s going to pay the price.” He added, “I’m hooking these white folks up with tickets.”

Although Foxx violated several state and federal laws via his targeting of white citizens, he was never prosecuted.

The two-tiered system of justice that prevails in Columbus, Georgia treated Michael Weaver much differently. Weaver’s politically incorrect activism had for years been a thorn in the side of–a source of frustration to–local law enforcement and other Columbus power-brokers. They eagerly awaited their chance to silence him, put an end to his activism by whatever means necessary.

Their chance came late one afternoon when Weaver, sitting in his car after leaving a friend’s house, was accosted by two black thugs who attempted to carjack his vehicle. Weaver sprayed one of the thugs with pepper spray, then fled the scene. He returned to his friend’s house about an hour later, where he was arrested by a black cop who entered the house without a warrant. Weaver was charged with simple battery, a misdemeanor. The “victim” sustained no injuries from the spray and declined medical treatment.
Weaver’s bond was low, and he was released from jail a few hours later. He was assigned to appear in State Court the following month.

The power-brokers who befoul Columbus had other plans for Weaver, though. At the urging of Cathy Bush, a white female police detective who had hated Weaver for years, his misdemeanor case was referred to the district attorney’s office. Weaver now faced a felony aggravated assault charge.

Weaver’s hearings before Superior Court Judge Bobby Peters on Nov. 14 and 15 of 2011 were a Soviet Union-style travesty–mockery–of justice. Weaver’s public defender, Robin King, told him that his case was a slam-dunk, an easy win even for a first-year law student. She and her co-counsel, Ray Lakes, were eager to go to trial. Judge Peters and the prosecuting attorney, Michael Craig, were not. They knew they had a weak case at best. They knew that both of Weaver’s attackers had long criminal records, and were on felony probation at the time of the attack. They knew, too, that even the testimony of then-Columbus-based Rabbi Jeffrey Salkin would be of little actionable value. It is not illegal to conduct an online debate with an opponent. Salkin now resides in the area of West Orange, New Jersey, where he heads that state’s chapter of the infamous Anti-Defamation League ( ADL ).

The jury forewoman contacted Peters. The jury was awaiting its call. Peters shifted nervously on his throne, then called a recess. He beckoned Craig and counselors Lakes and King into his chambers.

A few minutes later the four emerged from Peters’ chambers. The dynamic of the hearing had suddenly and very dramatically changed. King, Weaver’s lead counsel, had changed her mind about going to trial. She now insisted that her client plead guilty to the aggravated assault charge. Frightened by the gravity of his situation and confused by the abrupt change in the direction of the hearing—Weaver agreed to plead guilty to a crime he did not commit.

It is abundantly obvious that deals and promises were made in Judge Peters closed-door chambers, and that Weaver’s “defense” attorneys betrayed him, sold him out, an egregious violation of their oath of office and the right of a defendant to a fair trial.
Before leaving this writer’s house, the deputies “requested” that, should he seek to correspond with his taxpayer-funded “public servants”—he should send his correspondence to the Muscogee County Sheriffs Department, whence they will forward it to its intended recipient. Yes, of course they will.

Rev. Pat Tracy: “As our sacred rights as Americans evaporate, it is important to support our most gifted and outspoken defenders of our rights. Mike Weaver is one of those defenders. Mike is a true American with every right to express his beliefs. That is the only reason why he sits behind the wall today. This tyranny will not stand. Truth and freedom will prevail. Support Mike Weaver!”