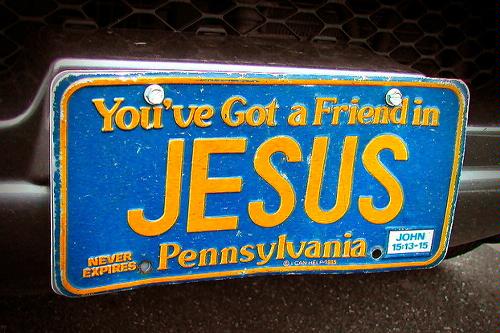 I was stopped in route to get a transmission check on my truck. I had a plate displayed on my truck which reads: “You’ve Got A Friend In JESUS” – the reason given to me by the Deputy for the stop. I was traveling in the right hand lane of southbound traffic on FM 423. The Deputy was driving in the left lane of the same southbound traffic. There were two vehicles immediately behind mine in both lanes of southbound traffic (four cars separated my truck and the Deputy’s vehicle). The Deputy stated that he, “Noticed my plate and what it said.” He said, “It is unacceptable,” (this is a recording that I have lost due to phone memory). I was asked by the Deputy for Driver’s License and Vehicle Insurance; having lost my Driver’s License in cleanup the day after Christmas (December 26), I provided the Deputy with my US Passport, a photocopy of my TXDL (expired), and my (current at the time) TXDL # for identification. I also provided the Deputy with a valid Oklahoma Insurance card, a valid Oklahoma vehicle registration, and receipt for each. The Deputy retrieved the information and took it back to his vehicle to run the checks on the validity of my information.

I sat in my truck and waited while he made his inquiries. As he exited his vehicle, I began another recording of the situation. I did not capture his actions, but instead of approaching my window as he did before, he proceeded to poke around and look through my property I had in the back of my truck. Eventually he came back to the window and explained that he did the necessary checks and only needed to do one more check – the VIN. A plastic card had fallen and lodged itself over the VIN tag on the dashboard, blocking the visibility of the VIN. At this point, the obstruction is brought to my attention by the Deputy. I attempted to remove the plastic card, but was unable. The Deputy asked me to exit the vehicle so that he could remove the card and verify the VIN, then he would “cut me loose.” I agreed to exit for the reason of verifying the VIN. I did not give any consent to my vehicle being searched.

As soon as I exited, another Deputy (referred to as Deputy Lee, no badge number given) approached and began pointing at property within my vehicle. Deputy #4604 removed paperwork from the floorboard of the truck and removed a leather blackjack from under the driver’s seat (the blackjack was not in a location that could be accessed to do any harm to the Deputies upon my exiting the vehicle – but I could access it in the event that I may be accosted or attacked from within the truck, as had happened in the past).

I was informed that the blackjack was illegal to possess in the State of Texas. I live in Oklahoma and work in Louisiana where they are permitted to be held within one’s vehicle. I was questioned again, this time by Deputy Lee, over the same things that Deputy #4604 had asked initially when he started the verification of my information. This was to be the final check – to verify the VIN, not to search my truck for weapons and remove property from my truck. Deputy Lee left my vehicle with my property and placed it in his vehicle, saying (inaudible in my recording), “I’m going to keep it.”

At this time, another officer arrived on scene (unnamed). This officer was displaying an aggressive attitude with his body language, but soon becomes aggressive verbally. He instructed me to, “Stop talking. Stop talking, now!”

In 35 degree weather, he instructed me to remove my hands from my pockets. I told him I was going to put Carmex on my lips. He immediately approached me and demanded I place my hands behind my back. The officer instructed me, “I’m not placing you under arrest. This is for your safety and my safety…alright, you are not listening to me. When I tell you to take your hands out of your pockets I expect you to listen to me. I don’t care what your excuse is.”

This is where he tried to take my phone from me and stop the recording. He did just that.

What is not shown on the video is: Deputy #4604 and Deputy Lee instructing me to rummage through my truck bed to find EXPIRED Texas tags (expired in October) and place them on my truck which has been verified to be registered and licensed in Oklahoma, thus placing me in direct violation. I was given two citations; one for failure to display driver’s license and the other for displaying the wrong license plate. Even on the citation, the Deputy recorded the information wrong and put the expired Texas plates as the correct plates for the truck. My property, the “JESUS” plate, was confiscated by Deputy #4604 “as evidence” and my blackjack was stolen by Deputy Lee.

I was scheduled for a pre-trial hearing on January 27, 2014. I motioned to have it postponed and was granted this request several times. During the time I had filed each request to postpone the pre-trial date, I motioned the court and the DA to dismiss the citations on the basis of the technicality of the information being recorded incorrectly by the Deputy; I found several cases where others had their tickets dismissed for the same reason I was requesting mine be dismissed. I have exhausted the court’s ability to postpone and have been asked to choose between a jury trial or a bench trial setting. I opted for the Bench Trial. It is set for the 24th of July 2014 at 1:30pm in The Colony, TX Precinct 2 Justice of the Peace, Denton County with JP, James R. DePiazza. I’ve sent multiple requests to both the DA and the JP for the return of my property taken by Deputy Lee and the plate confiscated by Deputy #4604. I have been denied.