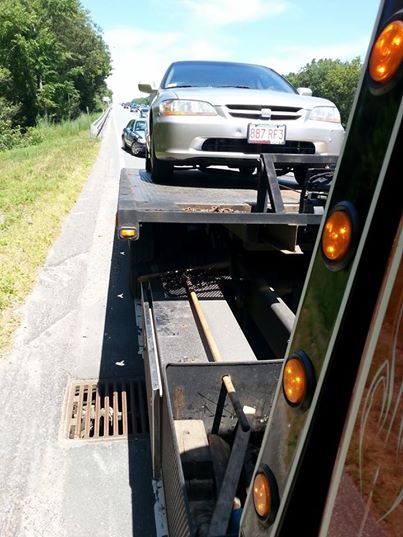 I got pulled over at 11:59 AM on I-93 South in Tewksbury, MA on July 12, 2014 by a couple savage staties. They told me my car is an uninsured motor vehicle and I have a revoked registration (which it was). They came to my window and told me a tow truck was already on the way! I had my wife and my 7 month old daughter in the back seat of my car, so my wife made a call for someone to pick us up as the officer directed, and he sat in his cruiser to wait. As soon as the tow truck came a few minutes later, Officer Dumont was suddenly in a rush, said to exit the vehicle and wait for that someone to pick us up . I told him my 7 month old daughter is not waiting on the side of highway, what the f—!? He kept insisting we get out of the car, getting frustrated, forcing us out of the car. He then told us to, “Exit the vehicle immediately. Get out of the car. Hurry, move, get out, I don’t have all day!” As we got out, I grabbed something and the cop was alarmed and put his hands on his taser, yelling, asking me what it was! It was a green pack of cigarettes I grabbed out of the door pocket by the door handle. It seemed like he wanted an excuse to start a dispute.

After I repeated that we couldn’t wait on the side of the highway, especially with an infant, he said, “Put the baby inside the tow truck and ride with him.” As we got to the tow truck, I yelled to the officer about the lack of space in the truck, but State trooper Dumont said to put my daughter in her car seat on my lap, putting her in a dangerous situation. If I was to have my daughter on my lap in my wife’s car and get pulled over, any cop would fuck with me and probably file criminal charges. They had absolutely no respect or courtesy towards babies. After my car was hooked, before it was lifted, they illegally searched my entire car without a warrant, when they thought I was already in the truck not knowing what was going on. They found out we knew they were doing the illegal search when I watched my wife walk up to them to ask their names. She approached Officer Comeau and he was very hesitant, saying it was already written on the ticket, “Don’t worry about it,” and asking why she wanted their names. They finally released their names after a lot of hassle. Fuck cops and all the staties; they’re all money-hungry fucking pigs, and the way they talked woke up and scared my daughter since the beginning, and she was screaming.

Now I’ve got two pending criminal offenses against me and a court date is being sent to me after I mail out the ticket for this shit. Today was actually my wife and I’s four year anniversary together, and we were going to enjoy the nice day at the lake with our daughter, but that turned out to fail and our day was ruined. This country needs a major makeover.