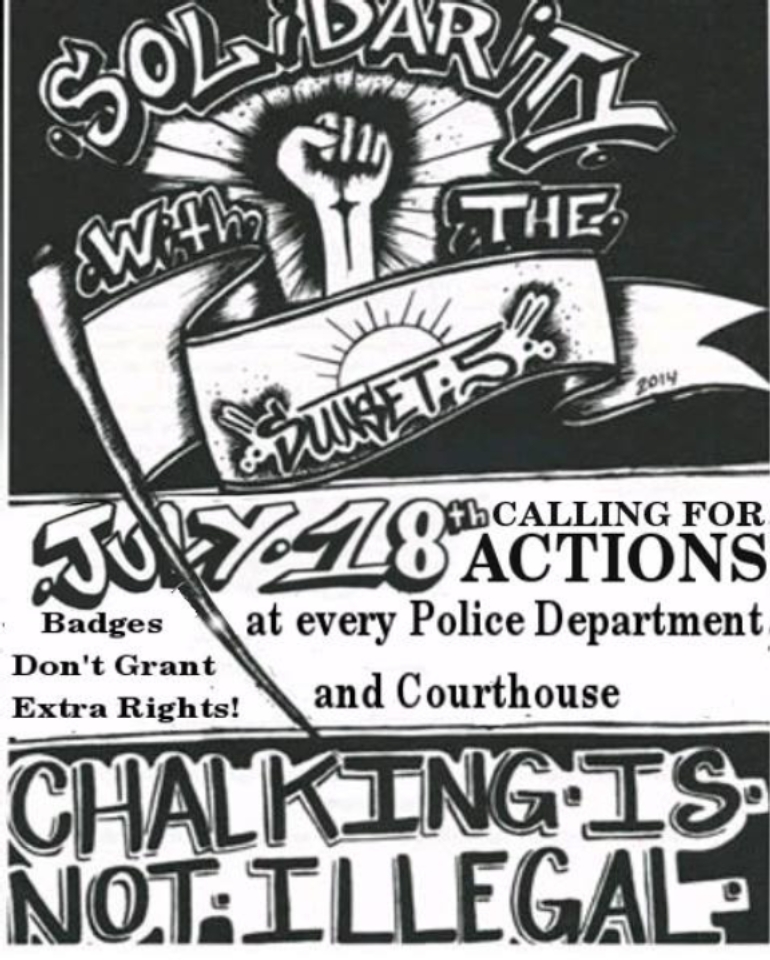 Every day brings with it more and more examples of the increasing militarization of the police and encroachment of the police state onto everyone’s lives. At the same time, accountability for police abuses and governmental crimes is becoming harder to find. This month on the 18th of July, the one year anniversary of the original “Chalk the Police State” event, members of Nevada Cop Block invite everyone nationwide to send a message that we won’t accept this within our communities and demand that accountability.

One year ago on July 18, 2013, three members of the Sunset Activist Collective, who were at that time being threatened with citations claiming that drawing on a sidewalk with washable sidewalk chalk constitutes graffiti, called for a nationwide solidarity rally on the day that was supposed to be our court date. While the city of Las Vegas had enough common sense not to even file those charges, this event (along with a previous “Second Saturday” chalk protest) ultimately led to the arrest of three members of the NVCopBlock and the filing of ridiculous charges of writing graffiti (with chalk marketed, sold, and primarily used to write on sidewalks) and “conspiring” to write graffiti against another two members (AKA the “Sunset 5”) by Steve Wolfson, the county district attorney.

*Note, if you’ve been following along at home, you may have noticed the number of people involved has changed from the original “Sunset 3” to the current “Sunset 5.” The “Sunset 3” consisted of the original three individuals that were cited in June of 2013. After the arrests the “Sunset 4” was used because one of the arrestees was a minor at the time. The “Sunset 5” consists of the three original members and two additional members that were charged after July 18th’s action last year.*

Of course, those ridiculous charges, which amounted to nothing more than a vindictive attempt to intimidate people who were bringing attention to the murderous record of Las Vegas area police and nonexistent history of accountability for those crimes, were dropped shortly afterwards. In the process, the actions of the bullies within the LVMPD, who had pushed for the charges, backfired in a big way. Realistically, all they accomplished was to draw way more attention to the issues of police brutality we were protesting than those protests had ever actually done. The ridiculously inflated clean up costs that they used to justify those arrests also shined a huge spotlight on the wasteful and unnecessary spending habits of the Las Vegas Metropolitan Police Department at a time when they were in the process of begging Las Vegas area residents for more money by way of a county sales tax increase.

A Year Later, What’s Different? (Spoiler: Not Much)

In spite of those original charges being dropped amid a pretty large uproar, those very real and important issues that we were protesting in the first place remain. The police brutality and outright murders continue and the complete lack of accountability for such have not disappeared or even, on any discernible level, been addressed. If anything, in fact, they’ve only gotten worse.

Over the course of just the last year, there have been numerous egregious examples of misconduct and abuse by Las Vegas area police. In one instance, Sheriff Gillespie refused the recommendation of the department’s use of force board to fire Officer Jacquar Roston, who shot Lawrence Gordon after he mistook his hat for a gun, which would have actually been the first time any LVMPD officer was fired for shooting someone in the entire history of the department. Similarly, Officer Jason Evans shot Antoine Hodges inside a local 7-11 store, in spite of the fact that he was unarmed and backing away from him at the time, after mistaking him for a wanted suspect. In yet another instance, a man attempting to flag passersby down and asking for water was accosted and then eventually killed by BLM agents and a Nevada Highway Patrol trooper after concerned cyclists reported that D’Andre Berghardt Jr. may have been in need of assistance.

The most blatant and telling example of the Las Vegas Metropolitan Police Department’s absolute refusal to institute any sort of accountability involves Jesus Arevalo, who murdered disabled Gulf War vet Stanley Gibson as he sat unarmed within his car, that had been immobilized by police vehicles. Even though Arevalo was technically the first person to be fired (or in any other way held accountable) for killing someone on duty, regardless of whether the person killed was unarmed and/or completely innocent, he was actually rewarded for his deadly actions that day with a lifetime of disability payments totaling $30,000 a year, based on the stress he felt because people began calling him a murderer after he murdered an innocent, unarmed person (shortly after stating that he wanted to kill someone in order to get payed time off).

It couldn’t be much more obvious that the LVMPD and other Las Vegas area police have no real (or even feigned) interest in holding any of their trigger happy gang members accountable for there actions, no matter how questionable or downright blatant those actions might be.

Join Us – Wherever You Are

As a result of all those things already mentioned and so much more that there’s hardly room to list it all, Nevada Cop Block will be holding a second annual “Chalk the Police State” celebration (which was actually inspired by Cop Block’s original “Chalk the Police Day” and so technically could be considered a fourth annual event.) at the Regional Injustice Center in Las Vegas. However, since police brutality and the absence of accountability isn’t something that’s limited to Las Vegas, we’re calling for groups (and individuals) across the country to join us in a little summer time arts and crafts display.

Ideally, we would prefer if you chose somewhere symbolic of the police state, such as a courthouse, local government building such as a city hall, or police station to chalk some messages. However, it’s obviously up to you to choose the most appropriate place to do so in your own city. Please join us and help seek justice in a peaceful, public manner against those who have made injustice a part of their job description and have some fun at the same time.

One of the many advantages of chalk protests and reasons we found them to be effective is that they are fairly easy to organize and carry out. Contrary to the claims made for the silly charges from last year, it takes very little “conspiring” to set up such actions. Also, because those participating can each draw multiple messages without too much difficulty, a relatively small group can create a large impact within a small amount of time. Basically, all you need is a few boxes of chalk, some dedicated friends, and a desire to seek accountability for local officials and their hired goons.

Currently we have six cities that have already confirmed that they will be participating. As many as six other cities may also be chalking that day, but we don’t have solid confirmations from them yet. The cities that definitely will be “Chalking the Police State” on July 18th are listed below, along with contact information for people in those cities to use in order to coordinate with them:

Members of Nevada Cop Block will, of course, be chalking that day. No amount of retaliation or intimidation will be stopping us from seeking accountability from the LVMPD. We’ll be going back to the Regional Injustice Center, the original location of the inaugural Chalk the Police State Day.

Celebrate “Chalk the Police State” Day in Your City

We hope that other cities will join us July 18th to make a statement about police brutality and demand accountability when police victimize people in their communities. Police corruption and misconduct is a nation-wide (international actually) problem and it’s only getting worse as time goes by. In addition, in spite the prevailing rationalizations for that increase in violence against citizens, police work is safer than it has ever been and is becoming safer all the time.

The mistreatment and abuse of you and your neighbors is inexcusable and needs to be stopped. Their record speaks for itself, though. They won’t regulate themselves or even hold the criminals in their midst accountable, after the fact. You need to take a stand and demand an end to the police state and its abuses before it’s too late.

A FaceBook event page has been set up to coordinate all of the different cities planning actions. If you have questions about setting up a chalk protest in your city, potential statements/slogans to write, questions of legality (it’s completely legal), etc. you can post them there. We would also like to have any local event pages link to that page, so we can keep track of who will be participating and allow people in those cities to coordinate with each other. That event page is located here: (National) Second Annual Chalk the Police State with the “Sunset 5” and in Solidarity with the Victims of Police Brutality, Repression, and Murder. Alternatively, you can also contact NVCopBlock.org’s contact page, if you are not on Facebook or just want to cutout the middle man.