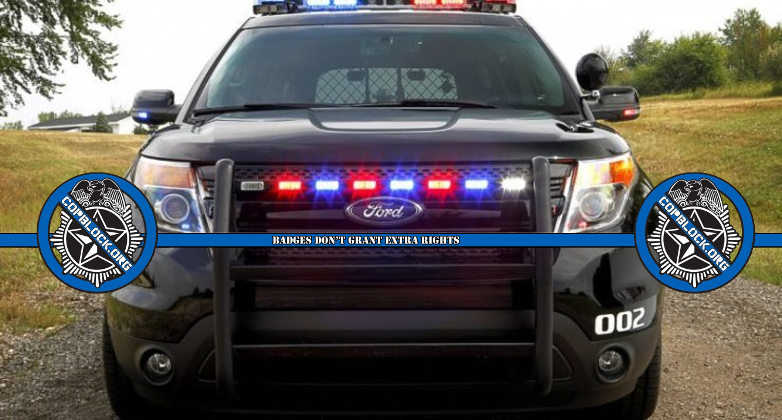 The following post was shared with the CopBlock Network by Tammy Shah, via the CopBlock.org Submissions Page.

On Friday May 30, 2014, at approximately 17:30, I was traveling westbound on the mass pike in the right lane with traffic flow. The traffic was slowing in the right lane due to a large vehicle at the front of the line of cars and trucks when myself and another vehicle ahead of me changed lanes to the left lane to pass. The vehicle in front of me sped away quickly. I increased my speed to about 70 to overtake the vehicles in the line of traffic. While traveling in the passing lane, a vehicle came up quickly to the rear of my car. I could see the headlights in my rearview and little else. The vehicle was traveling so closely to the back of my car that I could not see the license plate, all I could see were the headlights and a sturdy ‘cage’ type device on the front of the SUV. The vehicle was a large SUV type vehicle. I increased my speed to try to get past the line of vehicles quickly, but the SUV also increased speed accordingly and stayed dangerously close to the rear of my Prius. Traveling with my two dogs and my son in the car with me, I became nervous and was only concentrating on getting past the line of traffic and moving to the right so the SUV would no longer be tailgating me.

Once I cleared the end of the line of traffic, I swiftly moved to the right lane; the SUV immediately began to gain momentum to pass me and as I saw them come into my peripheral line of view on my left, I threw my hand up to display my frustration for their unsafe driving. Just as the vehicle came to the side of my car, and saw my hand up, they immediately slowed, flipped on blue lights, merged behind me and pulled me over. My son was in tears, my heart was racing, and I pulled to the side of the highway ASAP. The officer came to the side of my car and started barking orders. “License and registration!” I got my license out and handed it to him and was retrieving my registration when he demanded, “Do you know the speed limit on the Mass Pike?” I said it was 65. He said, “Yes, 65, NOT 80 like you were doing. Immediately I said that I was traveling so fast because he was too close behind me and I was scared; he cut me off before I could continue to speak, demanding my registration. The officer was intimidating and rude. He was intentionally trying to make me feel lesser with both his verbal behavior and his body language. I was clearly not a threat and I was not argumentative.

The officer returned to his SUV, still close behind my vehicle, and I could not identify what agency he was with. He left us sitting in the car for about twenty minutes. He finally returned and in an argumentative voice asked me if I knew what the left lane was for. I said, “Yes, for passing and…” He again cut me off and shouted, “YES, passing AND emergency vehicles! You are meant to enter the lane, pass the vehicle, exit the lane… enter the lane, pass the vehicle, exit the lane.” He was condescending and rude, treating me as if I was a child, and clearly trying to assert his dominance in the situation. I said I understood that, but that the line of traffic was tight and that he was too close to me, scaring me, and he again cut me off telling me that I had plenty of safe chances to make a lane change.

Well, I disagree! How can I safely lane change when someone is driving so close to my tiny vehicle with their huge SUV and any attempt I made to accelerate to give myself some breathing room was met with similar acceleration? The officer said he clocked me doing 80 and that doesn’t shock me, honestly. Anybody would speed to get away from what they feel is a potential danger – an unsafe driver! What if I had to stop quickly? He would have rammed the back of my car so hard everybody would have perished! His enormous SUV would have all but flattened my tiny Prius. Also, it amazes me that he was fully intent on passing me until I threw my hand in the air in disgust of his poor driving safety! Honestly, as far as I was concerned, he was still just some Joe on the highway being unsafe. I had no idea he was with law enforcement until he put the blue lights on. He didn’t like that I did that, so he pulled me over and he asserted his dominance over me the only way he could: to intimidate me, talk over me, and present me with a ticket. When he finished that and we pulled back on the highway, he immediately entered the left lane, accelerated quickly and ran up on the back end of another unsuspecting driver.

This officer is unsafe! His driving practices are unsafe and his actions reflect a poor attitude and a disrespect of other drivers; both on the road and face to face. He knew he was wrong, and he attempted to punish me as one would punish a child who acts out over an adults wrong doing.

Within approximately an hour after receiving my citation, I was at my mother’s house in Westfield, MA and I was placing calls to find out who his superior officer was and to lodge a complaint. It took me approximately four phone calls and around forty-five minutes (and the assistance of a very helpful State Police officer) before I got on the phone with the officer’s supervisor, Major Roberts. Major Roberts has assured me that he would investigate this situation and would be contacting me again on Monday June 2.

Since the issue, I spoke with Major Roberts on June 2nd, and Captain Roger Thurlow on June 3rd. Captain Thurlow had reviewed my driving record (which is clean) and talked with Officer O’Connell about the stop. The officer admitted to Captain Thurlow that he was ‘in a hurry to get to a location in need of a K-9 unit.’ However, Captain Thurlow told me it was not an emergency; a roundabout admission of guilt regarding speeding. Officer O’Connell also told the Captain that I had given him ‘the finger’. Captain Thurlow was careful to let me know that the officers are allowed a certain amount of ‘personal discretion’ when deciding to stop somebody or let them go. I told him that I wanted the ticket forgiven since Officer O’Connell’s hazardous driving was the catalyst for the whole situation.

To date, I have attempted to contact Captain Thurlow an additional two times. Only once did he answer me back, telling me my complaint concerning Officer O’Connell was ‘currently in the investigatory process. Please be assured that you will be contacted as soon as all pertinent reports are submitted and reviewed.” He has disengaged with me since June 6th, and ignored my second email, as did Major Len Roberts who was CC’d on the email. Finally on June 26th, I reached out to the acting Director Lt. Colonel Chris Baker with an email directly to him; but alas no response from him either. On July 17th, I phoned and left a voicemail with his admin/assistant.