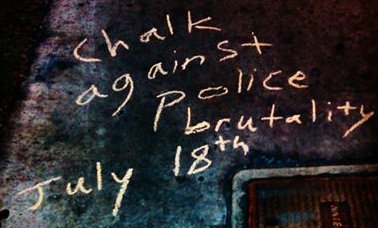 (This was originally posted to the Nevada Cop Block website)

Tomorrow, July 18th, is the Second Annual “Chalk the Police State” day. For the second year, Nevada Cop Block has called for activists across the country to hold chalk protests in their own cities in solidarity with and to draw attention to the victims of police brutality and the lack of accountability for crimes and other forms of corruption within local police departments.

This year in particular is intended to shine a light on the lack of significant changes in regards to such accountability and the blatant examples of police abuses nationwide. In addition, it will serve as a statement that we will not tolerate police violence and murders within our communities and that we are not just going to go away unless some sort of meaningful reforms are instituted and police officers are held responsible for their actions in the same way everyone else would be.

For more on the background and reasons for the “Chalk the Police State” event see here, here, here, here, here, and here. Meanwhile, here is an update of the cities that will be participating this year. At this point, we have pretty solid confirmations from 12 cities with a good potential for at least 16 cities nationwide. BTW, even though it’s obviously very short notice at this point, it’s still not too late to add YOUR city to this list. One of the many advantages of chalk protests is the ease of organizing and carrying them out. Basically, all you really need is a few boxes of chalk, some dedicated friends, and a desire to get the message out that police brutality will not be tolerated in your communities. It’s quick, easy, and cheap enough for even a small group of motivated people to have a visible impact.

Members of Nevada Cop Block will, of course, be chalking that day. No amount of retaliation or intimidation will be stopping us from seeking accountability from the LVMPD. We’ll be going back to the Regional Injustice Center, the original location of the inaugural Chalk the Police State Day.

It’s Not Too Late to Celebrate “Chalk the Police State” Day in Your City!

We hope that other cities will join us July 18th to make a statement about police brutality and demand accountability when police victimize people in their communities. Police corruption and misconduct is a nation-wide (international actually) problem and it’s only getting worse as time goes by. In addition, in spite the prevailing (and false) rationalizations for that increase in violence against citizens, police work is safer than it has ever been and is becoming safer all the time.

The mistreatment and abuse of you and your neighbors is inexcusable and needs to be stopped. Their record speaks for itself, though. They won’t regulate themselves or even hold the criminals in their midst accountable, after the fact. You need to take a stand and demand an end to the police state and its abuses before it’s too late.

A FaceBook event page has been set up to coordinate all of the different cities planning actions. If you have questions about setting up a chalk protest in your city, potential statements/slogans to write, questions of legality (it’s completely legal), etc. you can post them there. We would also like to have any local event pages link to that page, so we can keep track of who will be participating and allow people in those cities to coordinate with each other. That event page is located here: (National) Second Annual Chalk the Police State with the “Sunset 5” and in Solidarity with the Victims of Police Brutality, Repression, and Murder. Alternatively, you can also contact NVCopBlock.org’s contact page, if you are not on Facebook or just want to cutout the middle man.