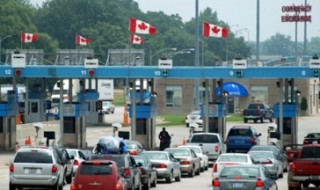 Returning from Canada in a work truck, I was pulled in for inspection. Officers went outside to search my truck while I waited in the compound.

Upon returning, one officer pushed me against the wall and handcuffed me while the other patted me down, then stuck his hand in my pants and did a body cavity search. This was done in a public setting in front of other tourists and drivers (and officers.)

Then I was detained in a small room for an hour or so, still not knowing what I had done wrong. The officers were very rude, yelling at me and telling me not to move.

Eventually, one of the officers entered with a small container of white powder and an aromatherapy device. When asked what it was, I told them. Another hour of silence passed.

Another officer came in and asked several questions, all of which I answered truthfully. Eventually, having nothing to charge me with, the officers gave me my property and told me I could leave.

A suit is pending in Federal court for both illegal search and seizure, as well as injuries for the PTSD and bipolar disorder my doctors say were caused by this treatment that caused me to lose my career as a driver.