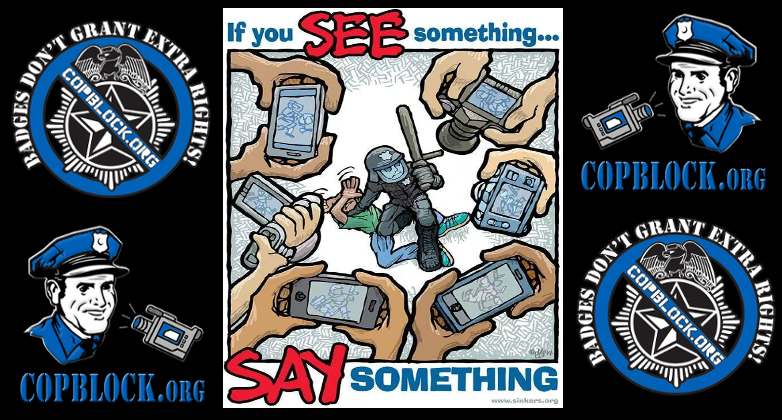 This post came about after contact from an editor for PostEverything, an online counterpart to the Washington Post, who requested up to 800-words of text focused on the impact a smartphone camera brings in situations involving police brutality. It was shared with the editor, who requested some changes. Rather than change the message it is shared here, at CopBlock.org, in the hope that it informs on ideas and tactics thought sound.

Peacekeepers or Aggressors? How Smartphones Unmask the Police
by Amanda B. Johnson

A man named Daniel Pantaleo murdered a man named Eric Garner in New York City on July 18th this year. Garner was standing peacefully on the sidewalk, and Pantaleo and a gang of his friends surrounded Garner. Pantaleo grabbed him from behind, choked him, and with the gang’s help, dropped the 400 pound father to the ground.

Garner gasped repeatedly, “I can’t breathe, I can’t breathe.” Pantaleo pressed the victim’s head into the concrete until Garner stopped gasping and died on the sidewalk. The gang then put Garner’s body into an emergency vehicle and drove away.

What may surprise those from a different place or a different time is that Pantaleo and his gang of friends call themselves “law enforcement” or “police officers.” But dead men can’t speak, so how does anyone know the details of the murder? In years past, witnesses to such crimes were swiftly silenced by police who agreed to protect one another by giving false testimony – a widespread practice of the Thin Blue Line.

Today we all know what happened to Eric Garner, however, because witness Ramsey Orta decided to film the scene with his smartphone.

Is this kind of incident uncommon? No. There now exists so much witness-gathered footage of assault by police employees that a new music video has been released which features them. The rap video cycles two and three-second clips of police assault, and there are so many that none have to be repeated.

Ramsey Orta and others have begun to realize that they hold a power in their pockets that creates accountability where otherwise there would be none. Cameras on smartphones are becoming as powerful as the police employees’ guns, tasers and clubs – and perhaps more so. As Judge Andrew Napalitano has said, “The camera is the new gun.”

Individuals across North America and around the globe have taken notice. Many collaborate under the banners of decentralized organizations like CopBlock, CopWatch and Peaceful Streets. A quick glance at this map shows the organic growth of police accountability groups.

Are they anti-police? It would appear not, as the largest organization among them, CopBlock, recently gave a rave review of a private, for-profit security firm called the Threat Management Center (TMC). This police alternative, which has served Detroit residents since 2000, deploys trained agents to de-escalate potentially violent situations for its clients, and provides free protection services for low-income clients, as well. Its 14-year track record is quite unlike that of the average police department: it has never once killed or assaulted any of its clients, for starters.

“Wouldn’t you expect greater transparency and bang-for-your-buck if you yourself hired your security firm and had the option to fire them? That’s what society could look like without a police system sheltered from competition.”

CopWatch and Peaceful Streets profess similar sentiments, with respective taglines of “Policing the Police” and “Protect and Serve Each Other”. It would seem that their members are not anti-police, but pro-choice. And what choice? The choice of who – if anyone – “serves and protects” you.

Though every situation is different, CopBlock literature advises that the following steps often help you avoid victimization if you have to deal with police employees:

1) Record your interaction. Capture an objective record of the exchange to deter any violations of rights. Use apps that will store your footage online as you record it, which is helpful, as police are known to steal phones and destroy evidence.

2) If approached, ask “Am I free to go?” If so, walk away. You may have to ask multiple times.

3) Don’t answer questions. Many believe it’s best to remain silent because anything you say may be cited as justification to extort or imprison you. If you do respond, answer questions with questions and refrain from making definitive statements.

4) Never consent to searches. Police employees cannot, per their own rules, search you or your property without your consent, a warrant or evidence of a crime. Loudly and repeatedly state, “I do not consent to any searches,” so bystanders can hear.

5) Be polite but firm. Police employees act as if they have a legitimate right to initiate force – they don’t. As difficult as it may be, stand firm, work to de-escalate and move on.

6) Disseminate the content you captured. The injustice system sides with its own. Share your story with others to leverage the court of public opinion.

If you have been assaulted or harassed by police employees, share your story at CopBlock’s submission page.

Everyone is better off if we leverage the Internet and technology to assert that “Badges Don’t Grant Extra Rights.”

Even the voice of one can be enough to reach thousands.