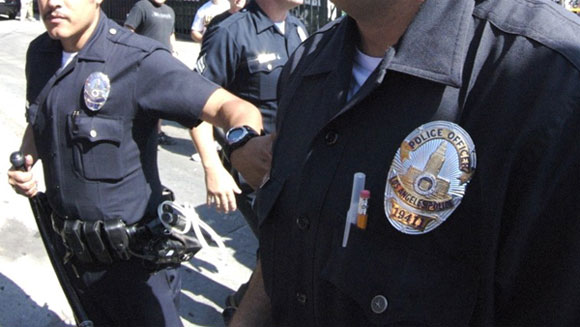 LAPD officers were involved in a raid on the intersection of Hope Street and Seville Avenue. A couple of friends and I were returning from a night out and were attempting to get home. Grand Street, which was our location for the night, was completely blocked, allowing no access, in or out. We approached the police officers involved in this road block and asked what was going on. Immediately, officer Houston threatened us with arrest for not following his orders and for asking questions. My friend really needed to use the restroom (you can hear him mention just that more than few times in the video). Sharkeez in Manhattan Beach, CA serves some great tacos to say the least.

Furthermore, when asked for a simple explanation of what was going on, Officer Houston stated he was not obligated to answer. I explained that as a public servant to our community, we the people have the right to know. He proceeded to state, “I am not a public servant. We provide a service to the public.”

In addition, he was nice to some extent. The video goes on, and as we noticed officer Houston getting agitated we decided to walk away in fear that we might have been assaulted, arrested and harassed, maybe even shot.

The video lighting was off as the officer did not want the light in his face.

We proceeded to go about our way, and I won’t give out too many details on how, but ten minutes later we were in the house.