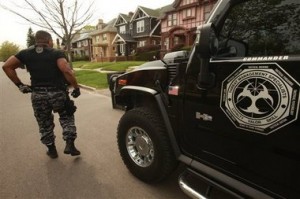 This post, written by Seth King, was originally published at DailyAnarchist.com.

Tonight I was pondering how we’d get started with a private defense agency. My train of thought usually goes something like this: somebody needs to start a company (agorist), hire some ex-military badasses like Adam Kokesh, then contract them out to local anarchist businesses, houses, clubs, or rent them out as escorts. Then I sigh a gasp of defeat over the fact that I’m too lazy and too busy and too inexperienced to start a business like that myself. Then I briefly ponder why the Kokesh’s of the anarchist community haven’t done that either. Not being able to come up with any satisfactory answer I switch to happier thoughts in order to stave off despair.

Tonight was a little different, though. First, I got perturbed over seeing a fellow Free Stater get man-handled by a group of thugs, this time non-state related. See the videos here:

This isn’t the first time Free Keeners have gotten attacked physically by bullies on camera. I know many of the Free Keeners are pacifists, so I don’t expect them to go on the defensive. But if they ever did, how would they go about it?

My first thought is that maybe the activists should make sure to always go out in pairs. Sure, swinging by the grocery store or going to the movies might not be that important. But when you know you’re going to be engaging in activities that are going to piss people off, even if what you are doing is totally righteous, it might behoove you to strengthen your defenses. And there’s strength in numbers. That seems like the bare minimum.

Next, I started thinking about body armor. Is there any shame in wearing a bullet proof vest? We all know the cops are trigger happy, but what about the local dregs? Check out this video here:

Sometimes we get so focused on how violent the state is we forget about the fact that there are a lot of ignorant, violent, non-state affiliated thugs too. And they do pose a threat!

The truth is, there’s really nothing stopping us from wearing bullet proof vests, helmets with face shields, open-carrying pistols, with tazers, batons, pepper spray, and hand cuffs. There’s no risk in it except ridicule.

Alright, so maybe it’d be overkill for every one of us to dress like that all the time, or even when engaging in activism. But it would be great to hire a couple of guards who are dressed like that sometimes. This seems like a niche market with growth potential to me.

For some reason ex-military haven’t stepped up to the plate and started anything like this yet. And I think the reason why is that they simply haven’t got the training. Most military members never get close to combat, and when they do it’s hyper-violent. Police, on the other hand, are better trained for close combat using martial arts techniques and non-lethal weaponry. Furthermore, they know the penal code.

Because police know the penal code so well, they know how to bend it and they know how to break it. But they also know how to follow it. Ex-military do not know the penal code. And when it comes to agorist policing, they’d likely get into more trouble than they’re worth. If you had ex-police doing agorist policing, I have to imaging that they’d know exactly how to perform a citizen’s arrest without later getting nailed for false-imprisonment. They’d also be a serious pain in the neck for other police officers who would be up against their “equals.”

But this leads me to ask “where are all of the ex-police turned anarchist?” It seems like half of the anarcho-capitalist community is ex-military. But I can’t think of one person that is an ex cop. The only reason I can think of is because people who join the military aren’t usually in it for life. They’re looking for a G.I. Bill. They rarely spend more than four or eight years in the military. But police are often in it for life. Law enforcement is seen as a career.

That being said I know many military members can’t wait for their tour to be up because they’ve turned anarchist while serving. I have to believe that any cop turned anarchist could quit the force any time they want. So, why aren’t police officers turning anarchist? Are they getting brainwashed more than the military? Are they more power hungry than military? Is the police force more like a gang than the military, where once in there is no leaving the gang, except for retirement?

I know police are scumbag criminals. But I would just as happily welcome an ex cop to the anarchist community as I do ex-military. I believe in redemption. But there seems to be zero redemption among police.

What will it take for us to get them to do private (agorist) policing? Do we need to pay them more and offer them better benefits? What are your thoughts?

6
SHARES
FacebookTwitterGoogleRedditTumblr
DiggLinkedinStumbleuponMailPrint
You Can Support Cop Block by shoppping on Amazon using the banner below:
BANNERS ARE CLICKABLE