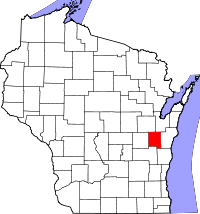 Calumet County (WI) deputies informed an individual that they were not allowed to carry a firearm in County parks. WI State law 66.0409 (2): Except as provided in subs. (3) and (4), no political subdivision may enact an ordinance or adopt a resolution that regulates the sale, purchase, purchase delay, transfer, ownership, use, keeping, possession, bearing, transportation, licensing, permitting, registration or taxation of any firearm or part of a firearm, including ammunition and reloader components, unless the ordinance or resolution is the same as or similar to, and no more stringent than, a state statute. clearly states local laws can not be more stringent than state law.

The sheriff was contacted regarding the state’s preemption law. The sheriff basically said that he didn’t care and was going to enforce the ordinance.

I went to the park openly carrying, as I believe the best way to fight an illegal ordinance is in court.

After one and a half hours in the park, the Sheriff deputies arrived and illegally detained me at rifle point.

After communicating with a state representative about what occurred, the state rep. brought his concerns about the incident to WI Attorney General J.B. Van Hollen.

With the political and legal pressure applied to Sheriff Mark Ott and the Calumet County Board, they will be changing their ordinance to be in line with WI statutes and the Sheriff will not be enforcing the current ordinance.

I was detained at rifle point for an unenforceable “Ordinance Violation” and was given a written warning.

Deputies never identified themselves before aiming the rifle at me.

Deputies returned my unloaded weapons to my person and the only pocket they patted down was my front left, when I requested to remove my phone from it. I carry spare magazines.

Deputies were not constantly observing me and I would have been able to get one of my spare magazines and reload my firearm.

Wisconsin also has a common law right to defend yourself from illegal arrest.

Now the Sheriff Dept. is telling me that my open record request is being delayed because they have a caller who wants to remain anonymous and they are transcribing the call into paper form…a transcribed call is not the record. They are creating a new record and refusing to provide a copy of the original record.