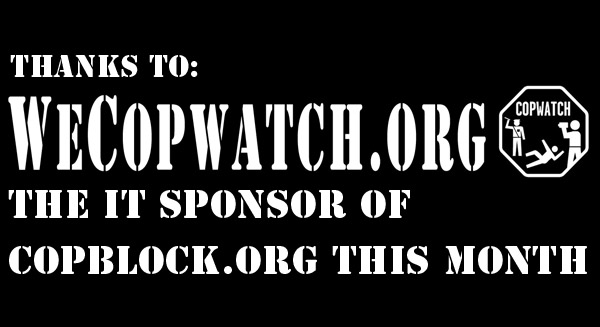 I’m excited to announce that WeCopwatch.org is this month’s IT Sponsor of CopBlock.org!

The monthly cost for CopBlock.org’s server and Cloadflare total about 128-FRN, which is now covered by our friends at WeCopwatch.org, which helps to ensure our presence online, while freeing up scarce capital to advance other efforts thought worthwhile.

I’ve had the pleasure of knowing CopBlock.org founders Ademo Freeman and Pete Eyre for some years. As a long time Copwatcher it was always refreshing to see them in the early Cop Block years traveling to different towns where police had been abusing people and documenting them, getting arrested, and somewhere in there producing content. Quiet a bit has happened since then and I credit Cop Block for helping people understand that Badges Don’t Grant Extra Rights.

I’m supporting CopBlock.org because the site is becoming the largest police misconduct/police watching information sharing networks in the world, which has helped people to share their stories of police abuse happening locally, as well as be an information hub of effective ideas for watching the police.

While this information allows us to understand all that is wrong with police, it also fosters dialogue about how do we live in a world where they don’t exist. In these conversations I have hopes that we as a people can reflect and better ourselves and never be what we find so wrong with people who think they have the right to hurt others.

With the support of WeCopwatch.org to address our tech costs for August, we can continue to advance the fact that Badges Don’t Grant Extra Rights by creating content, helping to support those who start groups or who are looking to connect with others in their area or those afar who are interesting in working on similar tactics, and much else.

Last month Jacob added WeCopwatch/Copwatch t-shirts and long-sleeves to CopBlock.org/Store. They’ve been moving briskly, which demonstrates the affinity that exists for that outlet and the ideas it promulgates.

For example, back in 2005, Jacob produced These Streets Are Watching – the first know-your-rights video that used real footage, which he captured on the street in three cities. And last fall, he and I traveled under the banner of The Police Accountability Tour, and made some positive impacts and connections in various towns.