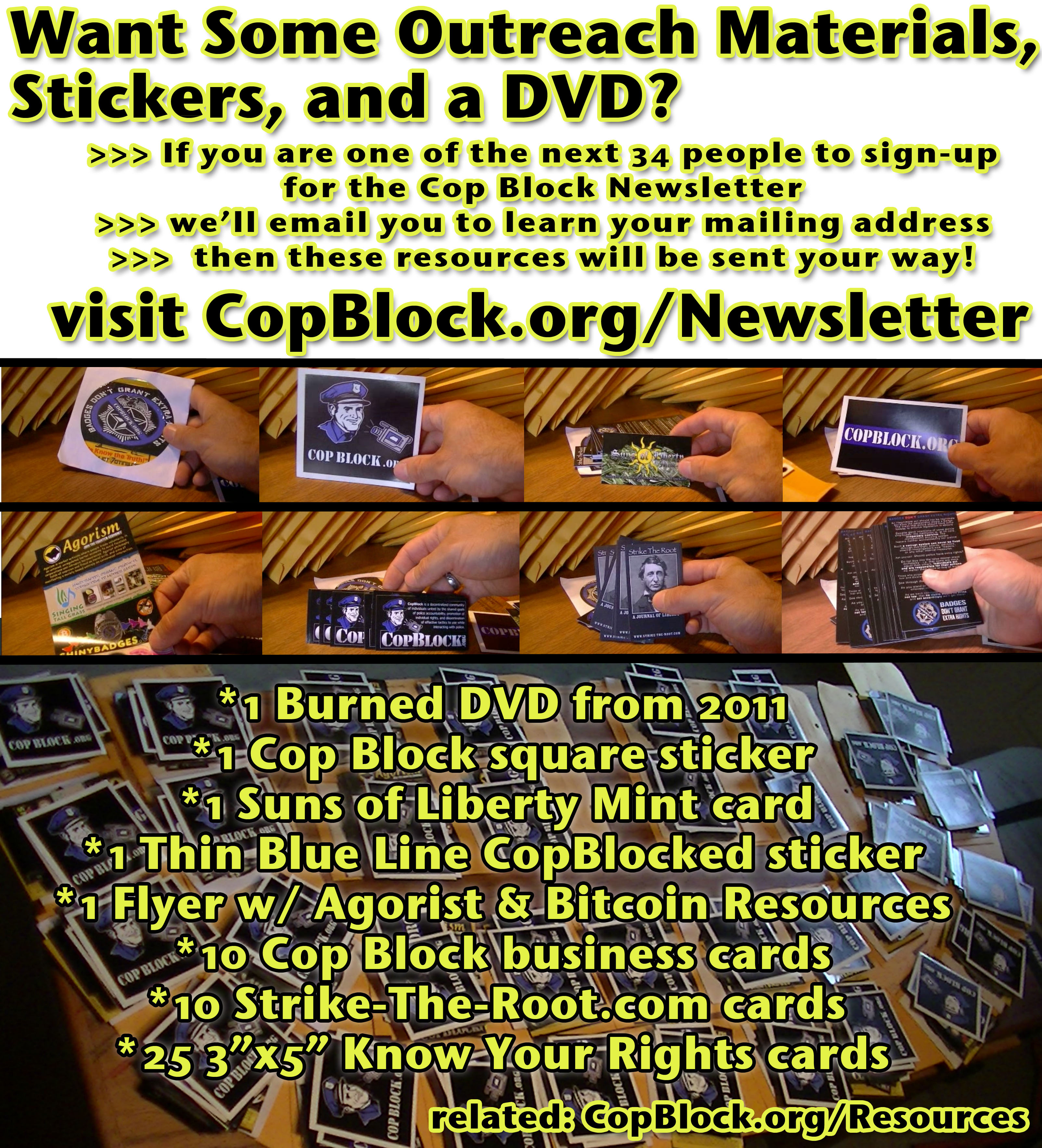 On Wednesday, 06, 2014 the graphic below was shared to Twitter.com/CopBlock [The graphic above – a newer version – has two changes: it correctly gives the year the DVD was created as 2011, rather than 2010; and the link at the very bottom points not to CopBlock.org/Flyers, but to CopBlock.org/Resources]

Have been shipped to individuals in:

On Thursday, 07, 2014 the text below was sent on an email to those had had signed-up for the CopBlock.org Newsletter

Yesterday the attached graphic, posted to Twitter.com/CopBlock, disclosed that the next 34 people who signed-up for the CopBlock.org Newsletter would be sent some resources. You’re receiving this email as you were one of the next 34 folks to sign-up (note that your email address is Bcced to protect your privacy).

When you have a moment, please reply to this email and let me know your mailing address (if you live in an apartment, be sure to include that info as well) and the little package will be sent your way.

Note that earlier this week Newsletter #003 was sent, so it will probably be another two or three weeks until the next one is sent.

Thanks in advance for choosing to have a positive impact in this ongoing conversation and for sharing with others the fact that Badges Don’t Grant Extra Rights!

And if you haven’t already connected with those in your area, you may find it worthwhile. Even if you don’t have a ton of extra capacity, initiating contact and cultivating a relationship can pay dividends if one day, getting more eyes on a police situation is needed. Known groups are listed at CopBlock.org/Groups
In liberty,
-Pete

Just a bit of background on the impetus for these resources being sent:

– a small stack of DVDs was discovered among our inventory of gear, so I thought it best to get them, and some text-based resources, distributed to those who’d put them to use
– the DVD included is actually from 2011, not 2010, as noted on the graphic. It includes 20 videos
– with the help of our friends active with Freedoms Phoenix, myself and Ademo Freeman had gotten a few thousand copies of the DVD created to distribute in Manchester, NH, where we were doing on-the-ground outreach to focus attention on the unjust actions of some Manchester police employees at an incident that came to be known as the Chalking 8
– folks present at that situation had sought to inform others of the lack of accountability afforded to the police employees who’d beat-up someone they claim to “serve.” That man – Chris Micklovich, was later given 200,000-FRNs from area taxpayers.
– it was during that stint in town when a couple highschoolers reached out and shared video that showed their school liaison officer, Darren Murphy, assaulting one of them. Ademo followed-up by phone, both to the school and cop shop, and a couple months later was threatened with wiretapping.