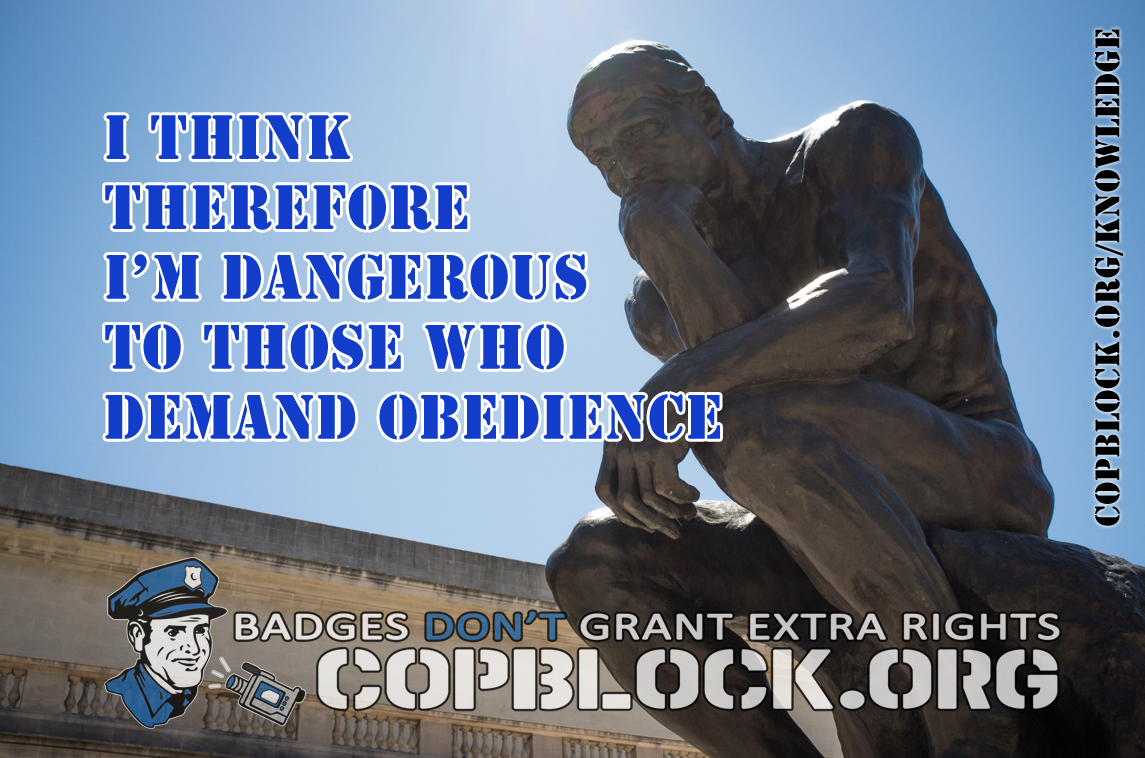 If you’re reading this text, you’re likely aware of the pattern of rights violations done at the hands of police. For many of us, police today represent the biggest threat to our peaceful coexistence. Yet, that by itself is not surprising.

In no uncertain terms – police claim the right to extort from you, to then provide you the service of protection. One could not dream up a more hypocritical structure. With both feet firmly entrenched in that muck of double-standards, police are incentivized to grow the size and scope of their operations. To harass and cage more and more people despite the absence of any victim, save for some fictitious entity called “the state.”

When questioned about their tyrannical actions, many police are quick to quip, “I’m just doing my job,” or, “If you don’t agree with it, change the law [legislation].” It’s thinking like that (or more accurately – unthinking), which led to the worst atrocities in recorded history. (If you interact with a police employee who parrots such things please encourage them to check out the page CopBlock.org/WelcomeLEOs.)

But is that a good tactic – to allocate your scarce time and resources to change legislation? Might that make things better? You see, the institution of policing depends on perceived legitimacy. So too do all aspects of the injustice system. Without that manufactured veneer of authority, most people would not put up with, let alone, choose to fund, that criminal enterprise. Any attempt to change the rules of that great fiction from within can never be successful since the same players remain. Do you believe that a police employee who murders someone is not responsible for their actions because those in legaland state that the action was done “under color of law [legislation]” and thus the killer has “sovereign immunity?”

As John Hasnas and Brainpolice have made clear, the ‘rule of law’ is a myth. If badges don’t grant extra rights, then it logically follows that any inside-their-system involvement feeds that soul-crushing, rights-violating machine. It is deleterious to complete liberty.

Any attempt to change or eliminate legislation only legitimizes the corrupt institution and its actors who subsist and thrive accordingly. The same flawed kernel remains. If you truly want to affect change, cease buying into the false hope that is dangled – always out of reach – by those who seek to rule us. Pull back the curtain. The growth of sites like Cop Block, the proliferation of groups across North America and the globe, and the widespread adoption of filming police interactions is indicative that this conversation is changing. Not due to legislation, or from pandering to self-proclaimed “authorities,” but one mind at a time.

Individuals are realizing that real change will never happen, and can never happen, within a structure built on coercion. Legitimacy previously granted is eroding. Aggressors who wear badges are not granted deference, which sets the stage for more egregious actions, but are being called out.

Mahatma Gandhi wrote, “If one takes care of the means, the end takes care of itself.” If you recognize the police state to be antithetical to your pursuit of happiness, think and act accordingly. As we each do so, the bad ideas that allowed for that monstrosity will be shed in favor of ideas thought better.