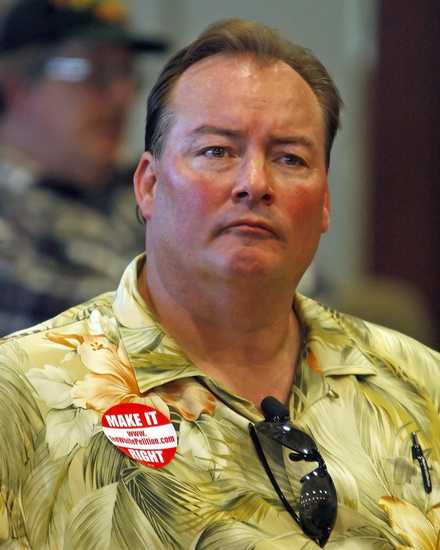 Last year I wrote about Ted White and his five year nightmare. Mr. White spent five years in prison after a police officer, who was sleeping with his wife, perjured himself in court. The officer’s testimony helped secure to Mr. White’s wrongful conviction for child molestation. Mr. White was eventually exonerated and released after it was learned that the prosecution knew of the the officer’s affair with Mr. White’s wife and that the prosecution was most likely complicit in the perjury.

After his release Mr. White filed a lawsuit against the city of Lee’s Summit Missouri, the chief of police, and the officer himself, Detective Richard McKinley. In 2006, as part of a settlement that would remove the city from the lawsuit, Lee’s Summit city government agreed to pay “any final judgment entered by the court in favor of White”, which indemnified Detective McKinley. In 2008 the court ruled that McKinley had violated White’s due process rights by withholding evidence. The court awarded White almost $16 million.  Lee’s Summit then refused to pay. Lee’s Summit’s mayor, Randy Rhoads, said that “Despite an indemnification agreement which removed the city as a defendant in this case, it has been determined after an extensive review that paying for any damages would be a violation of city ordinances.”  Rhoads went on to say that when the agreement was signed there was no way to know that the verdict would rule that McKinley violated White’s Constitutional rights and that “In light of the verdict, it’s unlawful under ordinance for the city to indemnify the defendant, Lee’s Summit city ordinances specifically state that if a city employee violates the rights of another person, the city shall not indemnify that employee.”

Earlier this this year, U.S. District Judge Nanette Laughrey threatened Lee’s Summit with a crime fraud hearing if they did not pay up. The city of Lee’s Summit has now changed course and has agreed to a settlement of $15.5 million. Mr. White will finally get some justice, but what he really wants is his children back in his life.  He has not seen them since his ordeal began.

When speaking of of moving on, Mr. White said “There is no room in a person’s heart for hate or revenge, so true forgiveness was the only way for me to take back control of my life…The detective stole my children — how hard is that for me to get past that? I haven’t seen them for years. They are worth more to me than $15 million… I used to pray for that man to take care of my children, and he was the one who put me in jail.”