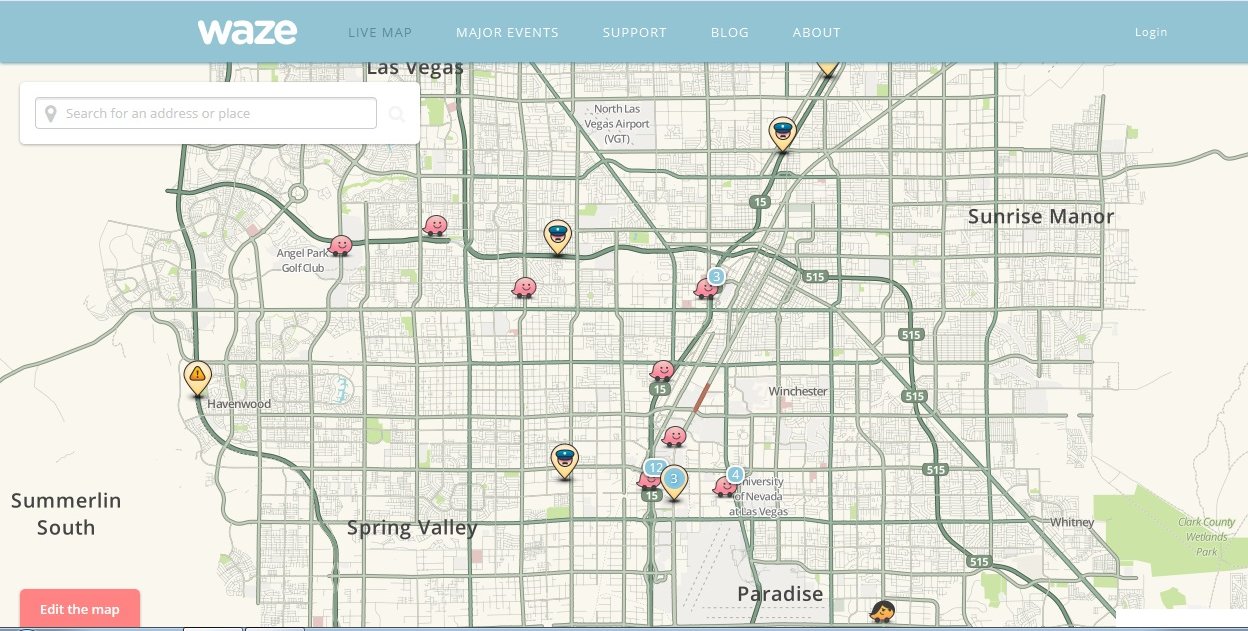 Recently, I was contacted by one of Nevada Cop Block’s supporters here in Las Vegas concerning posting about the “Waze” GPS app on NVCopBlock.org because he feels it is a very good resource for avoiding government revenue generators, such as speed traps and DUI or other types of checkpoints, as well as for other Cop Block related activities.

In essence what Waze does is allow its users to post real-time alerts concerning traffic backups, accidents, and road hazards. Among those traffic hazards that can be reported by users are police activities and locations where they have been spotted. This enables people with the app to “crowdsource” such information and help their fellow users avoid wasteful and costly situations.

While in the process of researching it and double checking to see if it hadn’t already been posted on the NVCopBlock site, I came across a previous write up about the Waze app on “the Free Thought Project,” which is another accountability site that often shares Cop Block content (and vice-versa). Since it already does a pretty good job of detailing the app and why it’s useful, I’ve reposted that review below. Also, I’m including a Youtube video from the 405Show.com, which is a site that creates videos involving driving related subjects, at the bottom of this post. The video discusses methods to avoid speed traps and mentions the Waze apps as one of the options to do so. Unfortunately, but not particularly unexpectedly, one of the things I also came across was an article that discusses how Google has integrated the information from Waze into their Maps service, with the exception of the speed trap information.

Note: If you have videos, stories, upcoming events/protests, or personal interactions with the police (and/or “justice” system) that you would like to share, send them to us and we will do everything we can to bring it to the attention of the world. In addition, you can visit the Nevada Cop Block resources section for information and links to the rights of citizens when dealing with police, during which you should always be filming.

Also, keep in mind this is a cell phone app. Therefore, driving isn’t the only option which this could potentially be useful. Conceivably, this could be utilized by someone walking around, as well. The obvious use for that would be by someone wanting to avoid being hassled/profiled by the police, who can use Waze to avoid potentially running into them. Because this is an app designed for driving, this could be somewhat less effective for people on foot, since people in cars aren’t as likely to report cops walking around. Of course, encouraging drivers and other pedestrians to do so would help offset that.

Additionally, another useful option, that would be even more relevant for Cop Block groups, would be to use this app as part of Cop Watch patrols. This could be done by either actively reporting speed traps and checkpoints or by using reports from other users to locate active stops and then recording the proceedings. Both of those potential uses for the Waze app would make Cop Block activities and the services that Cop Block chapters provide within their communities easier to implement.

*Note: the original post on the Free Thought Project mentions that Waze can be found on the CopBlock.org apps page, but when I checked it wasn’t currently listed there. Whether it needs to be added or was at one time listed, but isn’t now for some reason, is something I don’t actually know right now.*

If The Cops Can Track You, You Should Be Able To Track Them. Here’s How.

The limitless possibilities of new technology are allowing people to fight back against police abuse like never before. Not only can people record occurrences of police brutality, but there are also dozens of apps that are designed to help you stay a few steps ahead of “the man”.

Out of the many helpful apps that can be found on Cop Block’s apps page, a GPS app called “Waze” is one of the most helpful for pinpointing the location of police and reporting police sightings to other drivers. When someone sees a police car or a speed trap somewhere along their route, they can make a report alerting other drivers in the area about the police activity.

There is even an option that allows you to type in a message that gives a better description of where the police are and what they are doing. This option also allows activists to send out witty messages to their fellow travelers, such as, “warning: state mercenaries extorting civilians near exit 7″.

There are a few different GPS apps out there that have similar features, but Waze has the most users, making the reporting more frequent and accurate. Waze also awards points to people who make regular reports, encouraging everyone to stay active and warn other drivers of danger when they can.

A brief description on the app’s website explains how Waze works.

“After typing in their destination address, users just drive with the app open on their phone to passively contribute traffic and other road data, but they can also take a more active role by sharing road reports on accidents, police traps, or any other hazards along the way, helping to give other users in the area a ‘heads-up’ about what’s to come. In addition to the local communities of drivers using the app, Waze is also home to an active community of online map editors who ensure that the data in their areas is as up-to-date as possible.”

Download Waze today by searching “Waze” on the app finder in your phone, or try visiting www.waze.com