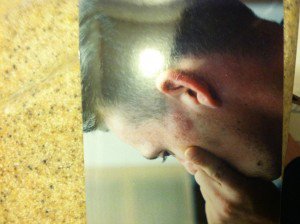 On 9-12-2005 at approximately 1:30 am on my way home from work, I was pulled over by a Lynwood, IL police officer for alleged speeding. The officer approached my car and asked for license and insurance. I stated that I didn’t have my license with me but gave him other info to run my name. He ran my name and came back to the car.

He first told me, “I’m not going to give you a ticket.” I heard what he said wrong, oddly enough, I thought he said he was GOING to give me a ticket. I asked him to see the radar. The officer then stated to me, “Well, since you are going to be a jack off and ask to see the radar, I’m going to give you a ticket, and you can follow me to the station since you don’t have your license.”

I stated to him that I heard what he said wrong, but he didn’t seem to care. A second officer had then pulled up as backup. Where they pulled me over was literally about 100 ft from my own driveway. The alleged speeding occurred on US route 30, which is Lynwood, but the subdivision I live in is NOT lynwood, it is directly off rt 30. But my subdivision was the first turn to turn in at when he pulled me over, and I live about a half a block off the US rt 30.

This is where it got interesting: The cop that pulled me over pulled a u-turn to drive back to the station. I, being that I was almost right in front of my house, turned in my driveway to turn around to follow him back to the station. His backup officer was still behind me, and I made the assumption he was going to follow me.

When I pulled in the driveway to turn around, I noticed the second officer wasn’t behind me. I exited the vehicle and peered into the street to see if he was there. He promptly flew up fast and told me to get back in the damn car. Right after that, the first officer flew back around, exited his vehicle, and told me to get OUT of the car. I panicked and grabbed my cell phone to call in the house to get someone outside because I felt threatened at that point. One officer told me to get out of the damn car then or else they were going to break my window out, taser me, and get me out. I said LOUDLY, “Fine, I’m getting out, please don’t taser me, I have a bad shoulder.” I opened the door and put my hands out first so they could see them.

The second I tried to exit the vehicle, one officer grabbed me by the shirt, ripped it, and tried to throw me. The second officer promptly pulled his taser out and laid into me. The first prong hit me on the side of the hip, and didn’t really stun me, but the second prong hit me in the back of the ass underneath, and it sent a jolt through my body – really bad. I was already on the ground by the time the second prong hit me, and I WAS NOT fighting them or physically resisting when I tried to get out of the car.

After the second prong hit me, one of the officers, even though I was laying face down in a prone position, stood above me and jammed his knee into the side of my head. He continued to press his knee on my skull for about 10 seconds, and he then cuffed me from behind. By that time, both my mother and stepfather had exited the house and were in total shock.

Unfortunately for the police, my across the street neighbor was outside the WHOLE time and saw EVERYTHING! He oddly enough used to be a police officer in Markham, IL years before that. The officer who cuffed me and kneed me in the head was trying to make the illusion of me fighting him for his own dash cam. When they placed me in the vehicle, the camera was replaying itself while the officer took me to the station. I saw some, but not all, of it. They obviously charged me with resisting arrest. They booked me and gave me an IBond and let me out about 3:00 am.

When I went home, we took pictures of all the markings I had. I had bruises on both sides of the head, on my knee, my hands, extreme cuff marks, etc. When I went to bed afterwards, I started to have weird sensations in the bottom of my legs toward my ankles, presumably from the taser shot. Oddly enough, not long after that at some point hair in a patch on both lower left and right legs fell out, and to this day has not grown back. I did honestly feel a little shell shocked after the second taser hit me; I think it may have hit a nerve.

Soon after, I filed a complaint with the chief of police in Lynwood. My stepfather and I went to see him one night, and he honestly was the biggest jerk. He asked for my account of the story, which I gave, and he proceeded to not buy into it. He stated that there was no footage from the police dashcam even though I saw a brief version in the car with my own eyes! He even went as far to pull up my driving record and he commented to me that since I had one outstanding seat belt violation in Indiana, he “was going to have my license suspended.” I laughed in his face and told my stepfather, “Let’s get the hell out of here.”

Before my court date, the chief of police wrote me a letter that was about 6 pages long. His account of his officers was contradictory twice in the letter. I for the life of me cannot find the letter, but I could always request a copy and the incident report as well if need be.

It was funny how the police wouldn’t show up to their own court date on October 26th. I never filed suit but should have. I to this day am still unclear if I have any recourse being that it was eight years and eleven months ago. I have all other copies of the citations and pictures if anyone wants to expound on this further.