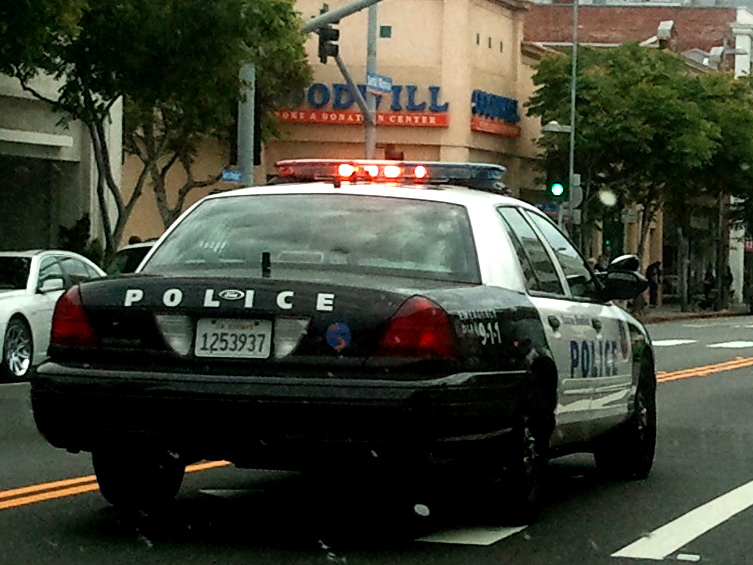 In early July, a homeless, schizophrenic man named Kelly Thomas was beaten and tasered to death by police. This is what Thomas looked like after his clash with the police (click to enlarge): John Bussman, a local defense attorney, has been protesting in front of the Fullerton police station for the past 2 Saturdays. “At our first one, only about 20-30 people showed up. I’ve met Kelly’s family a couple times now and helped them hang some signs on Sunday,” said Mr. Bussman. Jon & Ken on KFI AM 640 devoted a segment to the beating on Friday and drew a lot of attention, which may have contributed to the presence of about 200 people there this Saturday.

“The OC Register has been taking a lot of flak for their failure to give this appropriate coverage. The Register basically just said that one guy fought the police, then died a few days later,” said Mr. Bussman. The OC Register’s original coverage apparently gave no indication the guy was unarmed,  was not on drugs, and had his throat and skull crushed by six officers after he was Tasered 5 times.

“I expect that protests at the Fullerton Police Station will be my regular Saturday morning routine until there is some justice for Kelly,” he added.

According to multiple witnesses, the cops repeatedly beat the 135-pound man with weapons and shot at him with Tasers. They kicked in his face and crushed a knee or two into his throat. Friends For Fullerton’s Future, a local blog, broke the story and has followed this tale of police murder and corruption. The blog documents the officers involved were allegedly shown the video as they wrote their reports to ensure matching accounts, and reports were purportedly rewritten repeatedly to satisfy the management. Another officer involved allegedly bragged about the murder the next day in the lockerroom (see their coverage here).

If you are unrealistic and/or ignorant, you are probably horrified at this and may be honestly lamenting how such a thing could have happened – perhaps you’re hoping the DA has charged them with murder, or that the “good apples” are coming forward to do the right thing.

If you are realistic and informed, you know the rest of the story. The mainstream media isn’t too concerned. Google “Kelly Thomas Fullerton” and you’ll find scanty coverage. The DA hasn’t charged anybody with shit. The murdering fucks are probably still busy re-writing those reports to paint Mr. Thomas as a dangerous psychopath, and are probably still bragging about beating his brains out behind the secrecy of  the Blue Line. Initially, one cop was on administrative leave and the other five were temporarily reassigned to other duties (OC Register coverage here). On August 2, all five were put on paid vacation while a biased and thoroughly corrupt “investigation” continues.

The officers have not been fired. They have not been charged with crimes. The city has offered a $900,000 settlement to Ron Thomas, the victim’s father (i.e. the murderers aren’t paying for their crimes; the taxpayers are). Of course, had they been ordinary people (the ones they pretend to serve), they would all be in jail, with charges piling up against them, probably with gang enhancements alleged.

But not so, because they are cops. Cops are essentially a breed of demi-god in the United States of America. When they commit murder, they receive special treatment, and the public must beg the FBI, plead with local politicians, beseech the police department for accountability, or otherwise engage in boot-licking, humiliating, degradation in the hope they might receive a pathetic shadow of justice.

Americans learn in school that Hitler and the Nazis were the essence of evil, but the only lesson patriotic, state-loving Americans seem to take away from the experience of the Holocaust is that Germans were evil and fucked up. They willingly ignore the real lesson that flows logically from such a monumental disaster, which is that it behooves every citizen to beware of the banality of evil, and a blind deference to government and law.

Nazi Germany suffered not only from evil Germans in stupid costumes, it suffered from systemic support and entrenched infrastructure that condoned, supported and excused the actions of evil Germans in stupid costumes. The Hitler regime was able to continue because of institutional protections for those in government which allowed for failure to punish murder, cover-ups of murder of Jews with false death certificates and use of various excuses such as the Nuremburg defense to morally justify the eradication of people who may have at times broken inconsequential laws (not all Jews were killed merely for being Jewish – some were killed for breaking curfew, failing to wear gold stars, or other minor infractions). The problem was not that the system failed Jewish people – it was that the system was designed to kill Jewish people.

This is no different from Kelly Thomas’ beating. Six members of government savagely murdered a man, and continue  to walk free and take a vacation because the government allowed them to escape criminal charges, the government has cloaked them in civil immunity, and the government has encouraged cover-ups through falsification of police reports, and use of excuses such as “the law is the law” and “if he had  followed orders he wouldn’t have been beaten.” The system has not failed Kelly Thomas. The system was designed so that police can kill with impunity.

Despite the logically identical similarities, Americans will employ willful ignorance to deny this reality. I think I’ve got the distinctions figured out. Nazis were evil because they were German, and Americans are not German. Nazis were different because their uniforms were uglier, while American police wear more fashionable uniforms. The vile members of the Fullerton Police Department are different from Nazis because beating a mentally ill person to death is morally superior to frying a person in an oven.

In addition, America is a free society in which people can vote and make a real difference in the political process, so Kelly Thomas could have voted for the right politicians and police chief to prevent his beating. He had this opportunity, and could have left America if he didn’t like the laws, so his beating and untimely death were actually voluntary and completely different from the violent execution of innocent people in Nazi Germany. Sound familiar? I hear Americans say this shit every day. Well, let’s take it to its necessary logical conclusion then – Mr. Thomas wasn’t murdered; he committed suicide, because democracy, the political process, and the social contract makes it all “voluntary.”

On the other hand, a more reasonable person would conclude Kelly Thomas’ death demonstrates that at any given time in the United States, the punishment for perceived lack of respect can be death. This is not freedom, safety, or order. This is tyranny and chaos.

Watch a video of OCTA bus footage of witnesses describing and discussing the event. They agree that Mr. Thomas did nothing to deserve this violence, and appear extremely distraught:

Another witness’s video depicting commentary and Kelly Thomas screaming for his father as he is being beaten to death: