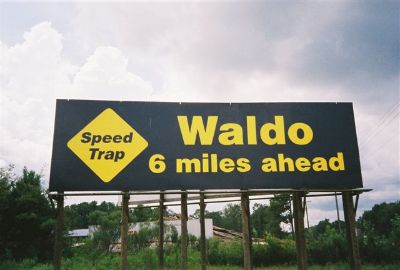 The information below was shared anonymously via CopBlock.org/Submit by someone concerned about the ramped-up road pirate activities in Waldo, FL.

-A Waldo police officer was fired by the city manager for insubordination towards the chief for undisclosed reasons (Likely refusing to obey the illegal ticket quota)
-His fellow bottom level officers felt their jobs were in jeopardy and requested a City Council hearing
-The officers laid out a list of grievances towards the department command, including confirming what citizens and motorists (Waldo is the 3rd worst speedtrap in the country) have known: they have ticket quotas. Which violates the Florida law they are supposed to be enforcing
-The officer that was terminated has been reinstated by the city council and the police chief is under review
-Half of Waldo’s entire revenue comes from traffic tickets. From the September 8th episode of Police State Monday, posted by Angel Clark in collaboration with PoliceStateUSA:

Four officers in the Waldo Police Department revealed to the city council last Tuesday that the department’s chief was assigning required quotas for writing tickets. The information was brought forth while discussing other complaints about activities in the department.