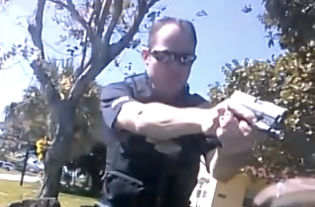 This content was shared anonymously via CopBlock.org/Submit by someone rightfully shocked at the actions, and spin campaign, of Boynton Beach Police employees.

The video, uploaded to the Youtube channel TRAGEDYDAHOTBOY, was accompanied by this description:

this is how i got treated by Boynton beach police department. officer pulls gun out and threatens to shoot…always record u have the right to do so

After conducting an “internal investigation” those at the Boynton Beach Police Outfit concluded that their colleague who pointed his weapon at the vehicle occupant and threatened to “put a round in your ass so quick” did not act in the wrong. B

ig surprise. That’s the accountability had with a coercive monopoly… A quick glance at their website shows that, far from even pretending to be personable, the individuals associated with the Boynton Beach Police Outfit seemingly take pleasure in trying to look intimidating.

For more on this incident, and the complete lack of accountability thus far afforded to the aggressors, check out the on-point analysis from Carlos Miller over at Photography Is Not A Crime in post Florida Police Chief Defends Cops’ Aggressive, Violent and Life-Threatening Reaction Against Men Video Recording them which includes these excerpts:

Boynton Beach Police Chief Jeffrey Katz defended the aggressive reaction of his officers in a Youtube video Tuesday, claiming the men in the car were “escalating” the situation by “recording the interaction,” causing one of the officers to fear for his life when a man “reached out of his window with a black object in his hand,” which was nothing more than a camera phone trying to record the cop’s name tag after he refused to provide it.

That cop slapped the phone out of his hand, then yanked the man out of the car, throwing him facedown on the grass while another cop with his gun drawn comes charging towards the other men, threatening to shoot one of them for who knows what.

“I’ll put a round in your ass so quick,” the cop said, even though none of the men in the car were doing anything more than being assertive about their rights, even if they were doing it in a profane manner, which is protected by the First Amendment.

The video cuts off when the gun-pointing cop moves to the backseat and arrests the man with the camera, eliminating the deadly threat they were envisioning…

Katz, who prides himself on being a social media whore on Twitter and Facebook, comes across arrogant and condescending in his statement (posted below in its entirety), stating that the men deserved to be attacked because they did not show enough “fear.”

If you’re a Boynton Beach Police employee and are not supportive of your colleagues actions – either the still-unnamed psycho who pulled his firearm and threatened the gentleman in the vehicle, or the joke of an “investigation” done – speak out.