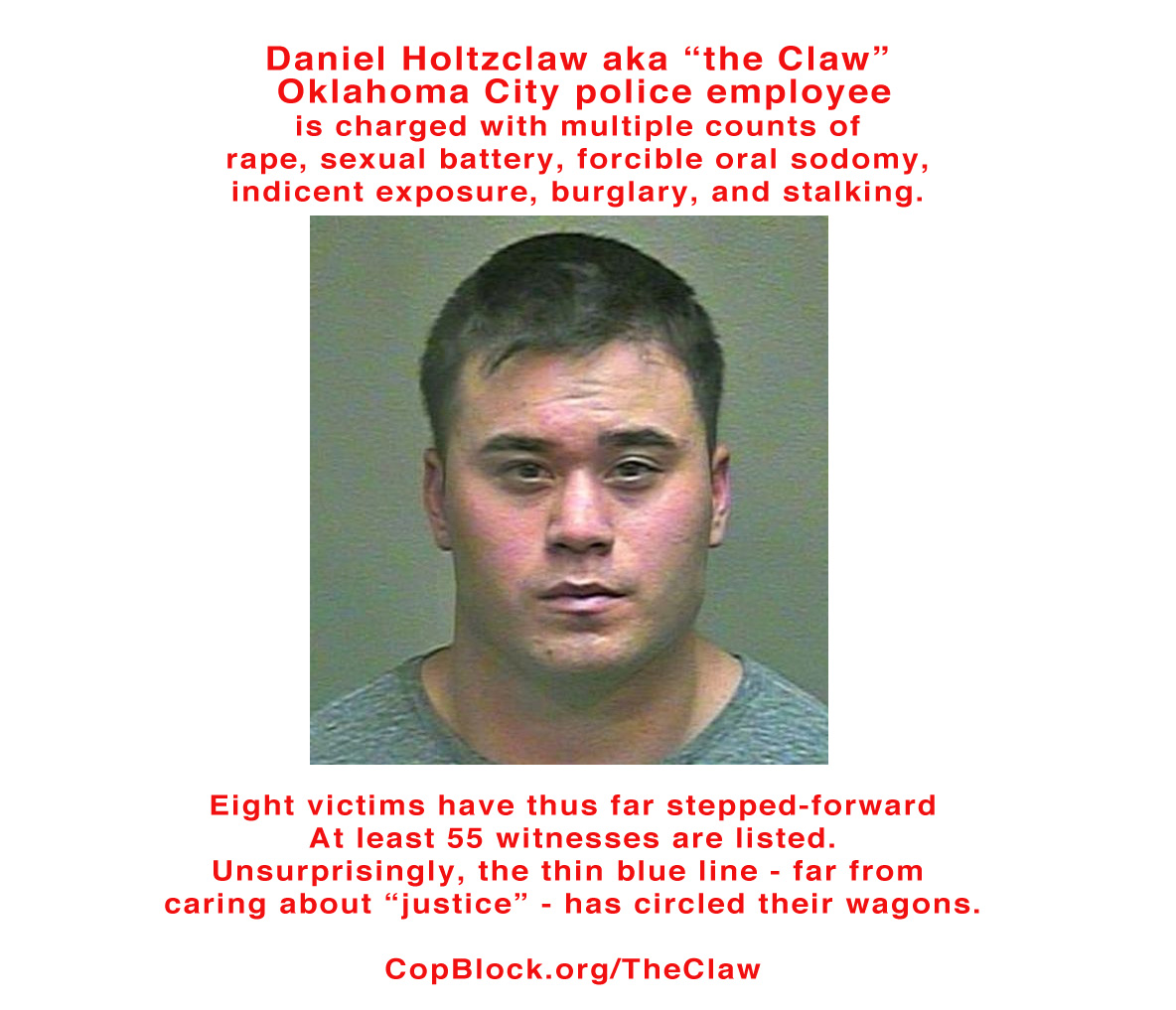 As a police employee, Daniel Holtzclaw has for years subsisted on extorting those in his community. While many, per decades of indoctrination, overlook that specific transgression (though that is definitely changing as more people become aware of that systemic double standard), it is his other rights-violating actions that as of late, have drawn the ire of many. Specifically, that he engaged in rape, sexual battery, forcible oral sodomy, incident exposure, burglary, and stalking while he donned a badge.

Holtzclaw – called “the Claw” by his friends, a nickname he was given when he played college football – is now being held with a 5-million-FRN bail.

According to a probable cause affidavit included in the charging documents, Holtzclaw stopped a woman walking in the area of Northeast 14th and Jordan on April 24. He located a crack pipe in her property. Instead of arresting her he allegedly took her home, forced her to perform oral sex and then raped her, making the statement, “This is better than the county,” referring to the jail.

Anthony Douglas, president of the Oklahoma NAACP told KOCO they plan to ask the U.S. attorney general to review the case and elevate the charges to hate crimes because the alleged victims are African-American.

In a classic attempt to circle the wagons, friends and family of “the Claw” started a Facebook page and GoFundMe campaign. As ostracism is important, feel free to drop by there and share your thoughts.

The former has as it’s banner image a quote from the head of the Oklahoma City Fraternal Order of Police John George, who notes that their outfit “stands firmly by its officers until a full investigation is completed.” Such is the norm in the thin blue line culture (as was made clear when a MD-based police union became the largest donor to Darren Wilson, the Ferguson police employee who killed Michael Brown).

The latter has thus far raised about 7,000-FRNs. To maximize transparency and reputation, below are the known donors:

Were “the Claw’s” exploits unknown to his colleagues? Are we to believe the he wronged so many people, and no one who worked with him was aware, or had any inkling that he acted as such?

I bet if the women “the Claw” was targeting happened to be the wife or daughter of one of his colleagues, they’d have already spoken up.

It’s not too late – if you are an Oklahoma City police employee and have more information that will help the truth become known, speak up. You’re welcome to anonymously share such information via CopBlock.org/Submit – doing so will help assuage your conscience. You may also find value in the resources at CopBlock.org/WelcomeLEOs.

Will Holtzclaw be held accountable through the injustice system? Will his victims be made whole, even if he’s caged (at the expense of others in the community)? Unfortunately, these types his actions, these gross violations of rights, won’t stop until we each cease buying into the bad idea that a stranger has authority because they claim it.