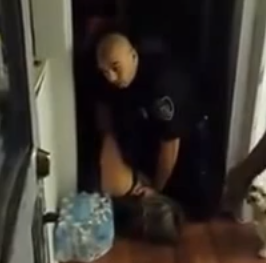 The content below was shared by Ryan Noone via CopBlock.org/Submit which documents out of control Romeo (MI) police employees. While it’d have been best for this situation to have not occurred, it’s great that it was filmed.

Before you have a police interaction be sure to view: CopBlock.org/FilmThePolice

It’s telling that after the police employees who caused the ruckus started to realize just how in the wrong they were, an attempt to justify their actions was made, “We come here, we need to make sure everybody is ok…” Also, that the police employees attempted to control the narrative of the incident, “All we had to do was talk to somebody and people started grabbing us.” Of course, unlike the police employees, the video is objective.

Clearly, the police employees primary focus was not the well-being of people in the house, but in gaining compliance and in maintaining their perceived legitimacy. Do they deserve any?

The cops showed up and asked to enter and the homeowner Keith said no. The cops forced their way into the home and started to take people down and put them in handcuffs. Keith repeatedly told them to get out of his home and a Romeo police employee tackled him and pepper sprayed him,

Man I tell you this is Nazi Germany starting with cops – its out of control.