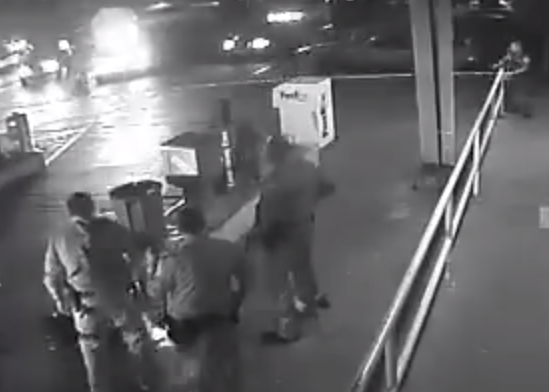 This post was shared anonymously via CopBlock.org/Submit It details the shooting death of someone who obstetrician was homeless. Just like schoolyard bullies who tend to target the most vulnerable, as the documentation at FatalEncounters.org makes clear, the same pattern can be seen for those who claim to “protect and serve.”

Fortunately, in this situation, video of the interaction exists, though, as was seen in Fullerton, that was still not enough for the killers of Kelly Thomas to be held accountable in legaland.

I bet the aggressors in both those situations would have not been as prone to use lethal force were the person they interacted with a family member whom they love – that’s the type of mentality that is needed for someone to really provide protection. Police employees today default to the initiation of force as their entire institution is based on control and double standards.

On the evening of August 30, 2014, Laredo police were called to the scene of an old truck stop. Reports indicate that there was a homeless man with a weapon. Police responded in droves, fired a large volley of shots at the man, killing him instantly.

Police claim the man was wielding a handgun but some conflicting reports and witness say that either the man was holding a BB guy or that he was unarmed. LPD has not confirmed any of the the reports. The surveillance video shows the man dropping and rolling to the ground as he is shot. Some witness say that he was already down when he was shot. It is difficult to tell because the man’s body rolls to ground from outside of the video frame.

The man is killed instantly but LPD officers handcuff him anyway. At 1:25, two officers one of which allegedly fired the fatal shot, can be seen giving each other a fist bump and apparently feeling really proud of themselves.

Those involved in the shooting death of this person in Larado should be made public so that they can be personally held accountable. And to prevent these types of of incidents from happening again, the police apparatus should be recognized for what it is, which will lead any thinking person to not grant it, or its actors, deference.