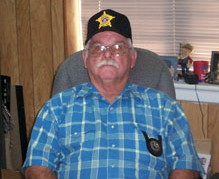 An unarmed man was shot and killed when being booked in Armstrong County jail. The cops said the man attacked them, and apparently over powered not one cop, but two.

On Sunday, Armstrong County Sheriff’s Office dispatched the sheriff and a deputy to a report of a disturbance at a store in Claude. A suspect was arrested and taken to the jail to be booked, police said, but during the booking, the suspect assaulted and overpowered the sheriff.

The deputy attempted to stop the attack, but was unable to do so and shot the suspect, police said.

The sheriff and the suspect were transported to a local hospital for treatment, police said. The suspect later died.

Already some have questioned why the shooter had access to a firearm, as standard procedure is for weapons to be placed into locked boxes when entering the jail facility.

Word on the street is that those employed at the nearby Amarillo Police Outfit will investigate. As protecting the legitimacy of their syndicates if so utmost importance, any thinking person can conclude that it will not be impartial.

No word yet on whether cameras inside the jail captured the exchange.