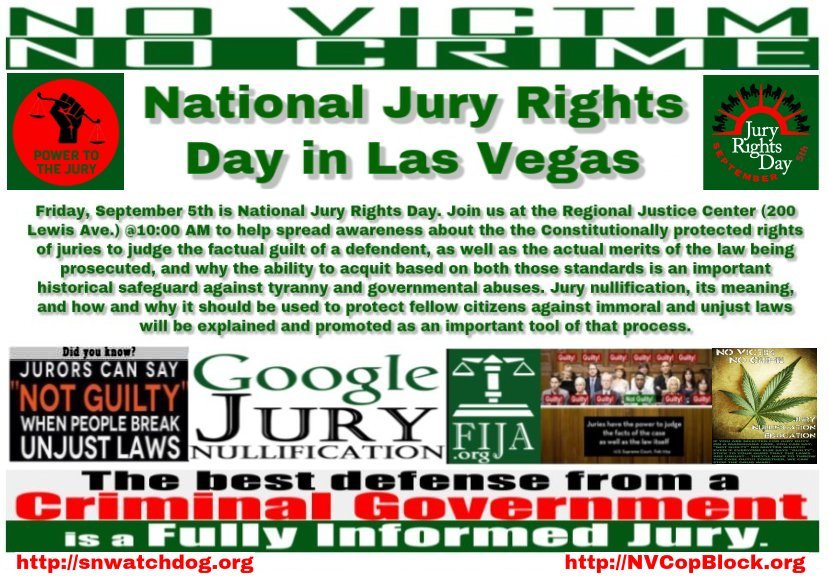 Note: This was originally posted at the Nevada Cop Block site.

A History of Jury Rights Day

People across the country will be celebrating Jury Rights Day September 5th. On this day in 1670, Quaker William Penn of London was arrested for the “crime” of preaching his personal religious beliefs. Penn pled not guilty and subsequently argued against England’s Conventicle Acts, which outlawed the practice of religions other than the Church of England.

At the conclusion of the trial, the judge instructed the jurors to find Penn guilty. However, the jurors’ refusal to enforce a bad law led to the court jailing them for contempt and withholding food and water from the jurors. This became known as “Bushel’s Case” because of Edward Bushel, the jury foreman’s refusal to pay the fines, which had been charged to the jurors.

Afterwards, some of the jurors appealed their fines and imprisonment. A higher court confirmed the right of the jurors to base their verdict on their best judgment and conscience. Even though there was a law against freedom of religion, the high court held that juries could not be required to enforce any law they thought was wrong.

This higher court ruling created the precedent that jurors cannot be punished for their verdict. It also set a foundation for our rights of freedom of religion, freedom of speech, and freedom of assembly.

This ruling confirmed important protections for the jury, and firmly established the right of the jurors to refuse to accept bad government laws. This method of rejecting bad laws is called jury nullification or jury veto. Through jury nullification, people can control their government by refusing to allow immoral laws to be enforced.

Resulting common law concepts firmly uphold the fact that Jurors cannot be punished for rendering or refusing to render a certain verdict. Nor are jurors are required to give any reason for the verdict that they render or justify it in any way. The fundamental right of Jurors to render their verdict based on conscience is basic to the preservation of Justice, in a free society.

William Penn later came to Colonial America and founded Pennsylvania. Jurors continue to have the authority to nullify bad laws. This authority is our peaceful protection to stop corrupt government servants from violating our rights.

More information about jury nullification and jury rights in general can be found at the Fully Informed Jury Association (FIJA.org)

Schedule of Events in Las Vegas:

Friday ~
10:00 AM Pre-event flyering/outreach
10:30 AM Press Conference
11:00 AM Presentation about Jury Rights

Monday –
8:00 – 11:00 AM We will be handing out information about jurors rights and jury nullification to people going into the court.

The right to trial by jury is not as well respected as it should be or as our founding documents require. In clear violation of the plain text of our founding documents, several criminal defendants, perhaps even a majority of defendants, in Nevada are illegally denied their right to trial by jury. And, in those cases where juries are impaneled, the courts systematically confuse and mislead jurors as to the nature of their service on a jury. A jury trial is a check and balance on unaccountable entrenched government. It began as a check on royal power. It is still needed as a check on the power of the state. A litany of groups and individuals will gather at the Regional Justice Center in downtown Las Vegas the weekend of September 5th in honor of Jury Rights Day.

A press conference will be held on the steps of the Regional Justice Center, 200 S Lewis. (View map to location) Representatives from several groups will speak on the importance of the right to trial by jury to them and their organization. Groups represented include, Nevada Cop Block, Southern Nevada Watchdogs, Patient to Patient, Compassion Nevada Consulting, Cindy Lake candidate for Clark County Commission, Jim Duensing candidate for Clark County District Attorney and the Fully Informed Jury Association, T. Matthew Phillips a Civil Rights Attorney.

An educational presentation at the RJC will be made by Jim Duensing, local attorney and candidate for District Attorney in Clark County. The presentation, geared towards the several homeschooled children attending, will also be enlightening to adult members of the public and press alike. All are invited and encouraged to attend this presentation covering the history and and nature of the right to trial by jury.

Volunteers will be distributing informational handouts provided by the Fully Informed Jury Association, www.FIJA.org at the Regional Justice Center. These handouts will educate and remind the public about the nature and importance of the right to trial by jury.