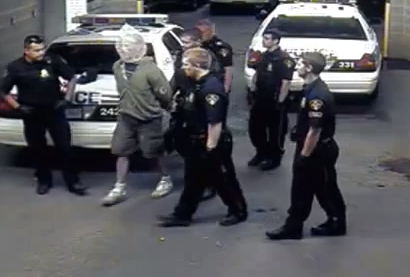 Jarvis Stewart shared the content below via CopBlock.org/Submit, which details his, and his brother’s interaction with Saskatoon police employees.

On the evening of August 24th, 2012 my brother and myself had a nasty encounter with the Saskatoon Police Service. We were ultimately thrown in jail for a period of 18 hours without a lawyer call.

My brother was charged with two counts of assaulting a peace officer, which were later dismissed at trial (after the officers testified). We were both charged with obstruction. Pretty much the textbook definition of contempt of cop.

Unfortunately for us, the new ($750,000) Saskatoon Police Service cameras “didn’t work for some reason”, and the police failed to secure a single witness statement. On top of this, the arresting officer in this case has a history of violent arrests (R vs. Affleck & R vs. Mertins).

To make a long story short, we pretty much got completely steam rolled in our trial. I decided to compile the video evidence in our case into a video suitable for Youtube, to see what the court of public opinion thinks..?

Seems like a similar caliber of professionalism and transparency north of the political boundary between the USSA and Canada as Jarvis notes, “The Saskatoon Police don’t seem to understand what it is they do for a living..?”