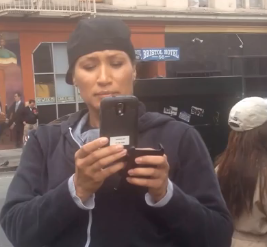 Princess M. Jacob-Fambro shared the video below via CopBlock.org/Submit, which details a couple standoffish, unprofessional individuals who wear badges emblazoned with “San Francisco Police.” It’s hard to imagine anyone in that community would choose to pay for such a “service.”

My Daughter and I was standing at the bus stop, when a undercover car pulled over and four officers jumped out and walked directly up to us and harassed us FOR NO REASON.

I was afraid for my daughter and myself.

I believe that if I hadn’t kept REPEATING that I was Running For President 2016,  me and my daughter would have became the next MIKE BROWN. I’ve seen police murder innocent people for no reason all my life….PLEASE SHARE THIS VIDEO so that we can End Police Brutality!!!

Editors Note: It’s unclear, why Fergus, Bangas, and their two colleagues felt it worth their time to surround and surveil Jacob-Fambro and her daughter – perhaps because she’s gives her affiliation for her presidential run as being with The Revolutionary Party? Regardless, the real issue is why such actions by self-described “public officials” is considered appropriate.

This dismal service from San Francisco police employees seems to be the norm: