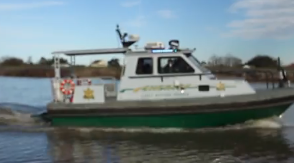 The content below was submitted anonymously via CopBlock.org/Submit by someone concerned about the incursion of police employees in the bayou where people seek to enjoy leisure time. Same as is true on land, where there is no victim there is no crime, thus the boat stops witnessed by the author, referred to as “unconstitutional and a flex of authority”, are not just.

On 24 August 2014 my brother and I decided to go and spend a few days out at his camp on the Tickfaw River in Louisiana (place can be only reached by boat, as it is out in the bayou). Across the river (maybe 300 yards) is a VERY POPULAR DRINKING SPOT called “The Prop Stop” that also serves some food, as it is the only place a around (also only reachable by boat).

After we arrived and unloaded the boat we sat on the pier because a lot of people were out as the end of summer is drawing to a close, to watch the going boats (Girls + bikinis ) we noticed that the Tangipahoa sheriffs department and Louisiana wildlife and fisheries were conducting random stops.

Authors note: A couple of years ago, illegal actions of Tangipahoa’s Sheriff employees were made known via another submission to CopBlock.org.

Not only were they checking for coherence of drivers, they were also checking for all papers and safety equipment. We watched them cruise around and do this for several hours.

I do not see the difference in this and stops on the road. As an avid fisherman and boater I have been stopped several times to check licenses and safety equipment and in my opinion this is unconstitutional and a flex of authority.

Authors note: According to the Tangipahoa Sheriff website, “The Water Patrol also takes a pro-active approach to crime prevention.” That apparently implies presuming everyone is guilty unless they can prove otherwise?

Louisiana Department of Wildlife and Fisheries