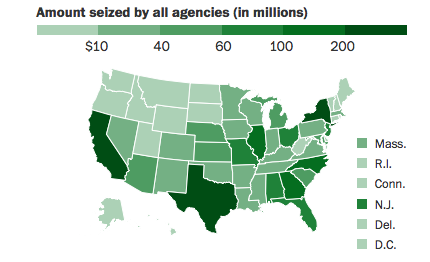 This content below, shared by G.G. Allin via CopBlock.org/Submit, touches on a Washington Post that thorough details the rampant theft of property from peaceful travelers from those who operate under the guise of “protecting and serving.”

You are encouraged to read that entire write-up, Stop and seize: Aggressive police take hundreds of millions of dollars from motorists not charged with crimes by Alice Crites, Alexia Campbell, Cathaleen Chen, Hoai-Tran Bui, Nagwa Abdallah and Justin Warren.

We have all seen the videos and read the stories of law enforcement illegally seizing cash and other personal property from innocent American citizens that are simply & legally traveling from one part of our country to another. Unsuspecting drivers are typically profiled, illegally pulled over and coerced into a vehicle search. Cash and personal property are being seized, often without a warrant and often without a crime being committed. Drivers that have had money and property seized without cause are rarely able to get their cash and or property back from law enforcement because legal fees often out way their loss in cash & or property.

The Washington Post reported today that over 25,000 LEOs are utilizing chat rooms and networking system called Black Asphalt Electronic Network to brag about their highway robbery conquests & share tactics on how to better steal from innocent citizens.Within the Black Asphalt system, officers are encouraged to brag about particularly big hauls, and the members with the highest seizure total at the end of the year are dubbed a “Royal Knight.”

Editors note: Especially since the security theater of 9/11, police employees have systematically engaged in the outright stealing of small-to-large quantities of Federal Reserve Notes in the possession of people suspected of no crime. Those people are told, “prove that it was not obtained via illicit channels or else we keep it.”

Police employees across the USSA have been trained by individuals working at companies funding from their friends at the DC-based gang, the “Department of Justice” (a misnomer if ever there were one) on how best to arrive at situations that leave them richer, at the expense of those they pretend are their customers. One common tactic is to use a dog (that can be trained to trigger on command by the handler) when the person stopped does not give consent to a search.

The fact that this practice is so widespread is not surprising. This type of situation will exist, and it will get even more oppressive, unless the legitimacy granted to these roving bands of highwaymen wearing badges is withdrawn. Clearly, when the main motivation is to grow the size and scope of their outfits, and to further centralize and solidify their monopolistic control, it comes at the cost of our individual rights. Will you sit by and let this occur?

If this “legal” theft concerns you, check out Americans for Forfeiture Reform, which advocates for the reformation of America’s asset forfeiture laws to protect individual rights to property, due process, and equal protection.

But even more important, is to take your views to their logical conclusions. If it would not be just for me to stop you and shake you down, it cannot be just for another individual simply because they wear a badge. Then, base your actions on that fact.