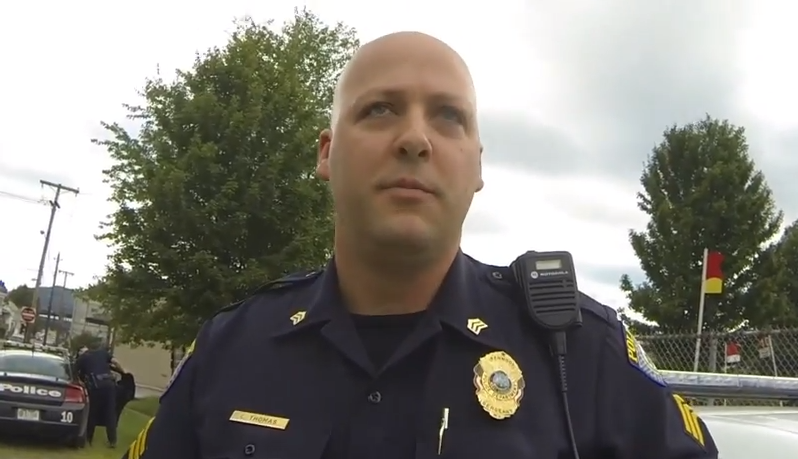 Larry Kiddey, who’s active with Belmont County (OH) Cop Block shared the information below via CopBlock.org/Submit. Kudos to him for being present with a camera when those in his community were being stopped by police employees for the non-crime of traveling faster than is dictated. As Kiddey notes at the end, the camera likely incentivized everyone present to treat each other well.

I was driving along RT 2 in WV and noticed a speed trap in Benwood. I decided to pull off and Cop Block the speed trap to slow down some drivers and save those drivers a little money in speeding tickets. RT 2 is famous for speed traps between Wheeling and Moundsville.

About 20 minutes into my Block, an officer pulls up to my right and begins videotaping me. Soon after, another officer comes up the ramp and it the the one that was speed trapping. With the speed trap busted, it was time to head back to the car and call is a day. While walking to my car, I was stopped by SGT. Luke Thomas of the Benwood Police Department. He gave me a verbal warning for being on a controlled access to a highway.

He was quite polite and acknowledged that I was well within my rights with what I was doing. It’s refreshing to find an officer that was actually present the day they went over civil rights at the academy. He requested ID because he believed I was committing an offense.

According to Terry V Ohio, I was only required to provide my name, address, and birth date. In the heat of the moment I forgot that and presented my drivers license. Shortly after leaving, I heard over the scanner the dispatcher telling SGT Thomas he ran and pulled up my info.

I am not anti-police by any means, but I am anti-double standards and anti-abuse of authority. None of that was displayed to me during this encounter. I have to tip my hat to SGT Thomas for his courtesy and professionalism.