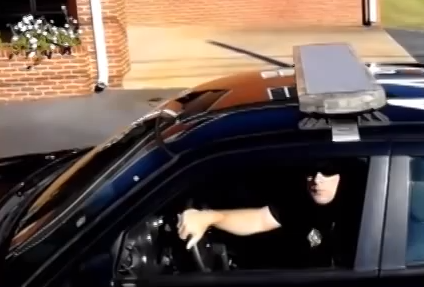 The content below was shared by Jacob Lewis via CopBlock.org/Submit. It documents a very well-handled police interaction. Lewis didn’t interfere, he knew his rights, and he acted accordingly – objectively showing the intimidation tactics employed to gain compliance. Perhaps that’s why those employed at the Spartanburg Sheriff’s Outfit told local media that they launched an investigation into him, claiming his behavior – filming those known to subsist on theft, and to claim a “right” to initiate force – is “odd.” That may just a ruse, to deter others from following suit, and either way, as those at the Spartanburg Co. Sheriff’s Outfit probably realize, an idea can’t be stopped by force.

Noticed a black SSO Charger with HEAT making multiple traffic stops. So, I walked up the public right away to record. I recorded the traffic stop which lasted about 10-minutes (trimmed for time).

After the traffic stop Deputy Sukoup (badge # 63 I believe he says) backed up to question me. I invoked my 5th Amendment right to remain silent. At this point Deputy Sukoup begins talking on the radio. I have to ask him about four times for his name and badge number before he finally provides it. He then proclaims that South Carolina does have a Stop and Identify law and unlawfully orders to see my identification several times, which I lawfully refuse as he has no suspicion that I have committed a crime. Which I make him acknowledge several times.

Deputy Sukoup’s demeanor is obviously confused and surprised throughout the clip that I don’t fall for his intimidation tactics. I pressure him in to calling his supervisor out to the scene (27-A is suspicious person by the way) and as you can see in this clip that changes his demeanor completely. Deputy Sukoup even invites me to sit in his patrol car as it was a hot day.

Once in his patrol car we had a conversation ranging from the weather to Deputy Sukoup’s career in law enforcement (again I’ve trimmed this for time, I will include both good and bad encounters). It takes about 15-minutess for Sgt. Fraley to arrive. I explain to him what happen, making a verbal complaint of Deputy Sukoup’s behavior before he was called to the scene. After this I ask if I’m still being detained or am I free to go. Deputy Sukoup then makes the claim that I wasn’t being detained in the first place. Even though I didn’t make any other attempt to clarify this, do you really think I would have been free to go.

Some clips are missing particularly the end because my wife called several times which messed up the recording. Flex your rights everyone.

On 9/9/14, I was contacted by the local Fox news station about my video if I’d like to be interviewed. I met with the reporter later that evening.

The interview went very well and I was impressed with what they eventually showed.

Then they got to the SCS’s comment about the incident. They claimed they identified who I was and that there was an ongoing criminal investigation in to my background to see why I’m filming them.

I’ve been encouraged to file a defamation of character suit.

Is this a good idea? Could you please help me out with any advice if so? Thank you.