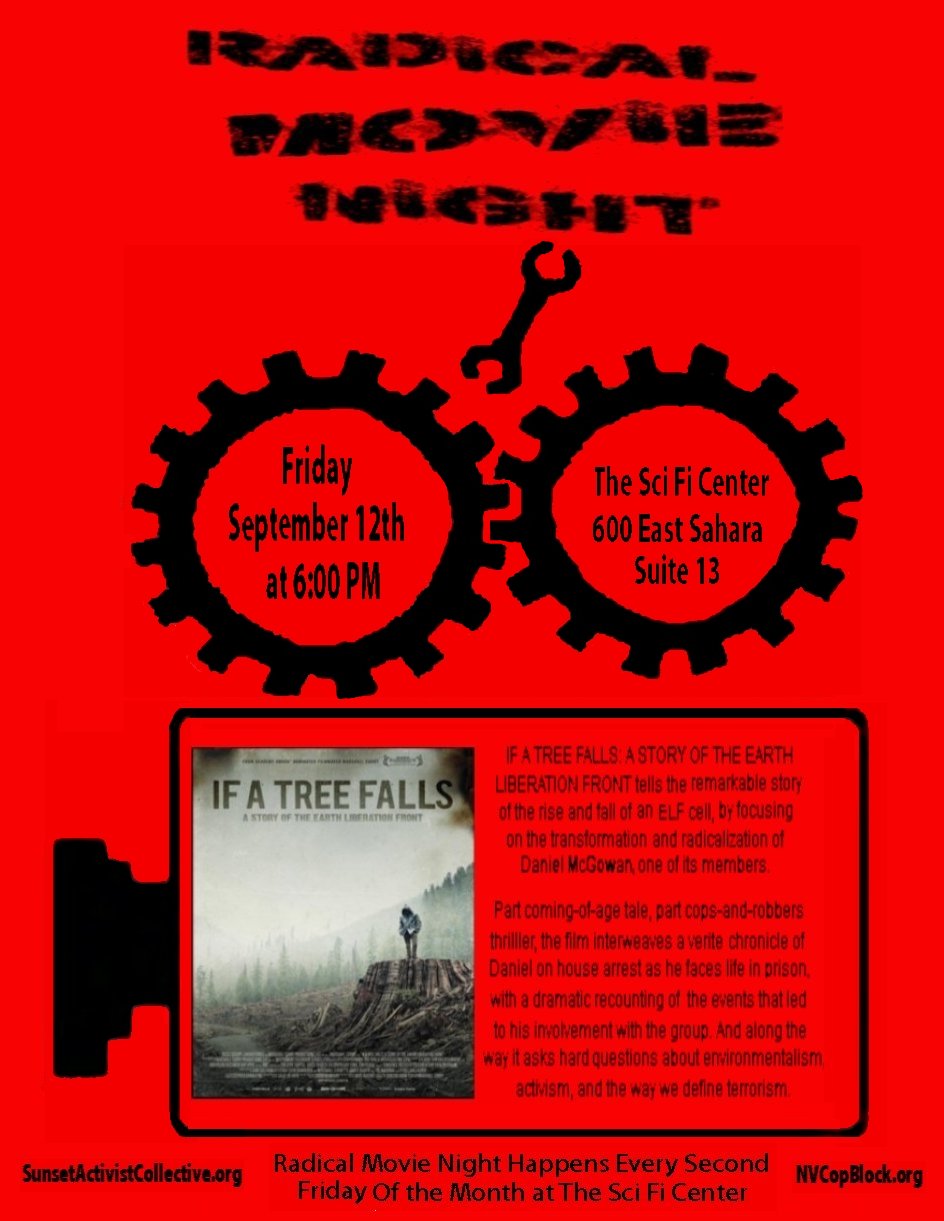 Note: This is a cross-post from the Nevada Cop Block site by Kelly W. Patterson. September 12th marks the debut of Las Vegas’ own Radical Movie Night, hosted by the Sunset Activist Collective, co- Sponsored by Nevada Cop Block and Food Not Bombs Las Vegas, and officially endorsed by the Las Vegas A-Cafe. This will be a monthly free showing of either a documentary or a movie with significant social value. The main purpose of Radical Movie Nights will be to connect local community members and encourage active participation within the local community by those within it to promote and empower those wishing to make positive grassroots-based improvements where they live and within their personal workplaces.

The location where Radical Movie Nights will take place is The Sci Fi Center, which many locals already know from its longstanding tradition for showing independent movies and cult classics that are often not available in a large screen setting. (Disclaimer: the Sci Fi Center is not actually involved in the Radical Movie Nights, outside of permitting us to use it as a venue for showing movies.)

In order to coincide with actions against the Animal Enterprise Terrorism Act (for more info about the AETA and local actions in response to it, see:http://www.huffingtonpost.com/2014/08/07/animal-enterprise-terrorism-act_n_5659893.html) beginning in September, the first movie that will be shown is ” If A Tree Falls: A Story of the Earth Liberation Front,” a documentary about the Earth Liberation Front, in general, and one of its members, Daniel G. McGowan, who was characterized as a terrorist by the US government after his arrest for environmental activism actions, in particular.

The movie, which was nominated for an Academy Award and won numerous other awards, shows the history and personal reasons why those involved in the ELF actions did what they did and how they became “radicalized,” during previous less militant actions. In addition it addresses issues involving the declaring activists, who never actually harmed or ever tried to harm people, terrorists, based solely on property damage.

However, it also interviews and discusses the perspective of the targets of those actions and the effects they had on them. As a result, it is a fairly even handed presentation of the facts involved, which allows viewers to decide for themselves who was right or wrong and why.

About the Movie (via http://www.ifatreefallsfilm.com/):

“In December 2005, Daniel McGowan was arrested by Federal agents in a nationwide sweep of radical environmentalists involved with the Earth Liberation Front– a group the FBI has called America’s “number one domestic terrorism threat.”

For years, the ELF—operating in separate anonymous cells without any central leadership—had launched spectacular arsons against dozens of businesses they accused of destroying the environment: timber companies, SUV dealerships, wild horse slaughterhouses, and a $12 million ski lodge at Vail, Colorado.

With the arrest of Daniel and thirteen others, the government had cracked what was probably the largest ELF cell in America and brought down the group responsible for the very first ELF arsons in this country.

IF A TREE FALLS: A STORY OF THE EARTH LIBERATION FRONT tells the remarkable story of the rise and fall of this ELF cell, by focusing on the transformation and radicalization of one of its members.

Part coming-of-age tale, part cops-and-robbers thrilller, the film interweaves a verite chronicle of Daniel on house arrest as he faces life in prison, with a dramatic recounting of the events that led to his involvement with the group. And along the way it asks hard questions about environmentalism, activism, and the way we define terrorism.

Drawing from striking archival footage — much of it never before seen — and intimate interviews with ELF members, and with the prosecutor and detective who were chasing them, IF A TREE FALLS explores the tumultuous period from 1995 until early 2001 when environmentalists were clashing with timber companies and law enforcement, and the word “terrorism” had not yet been altered by 9/11.”