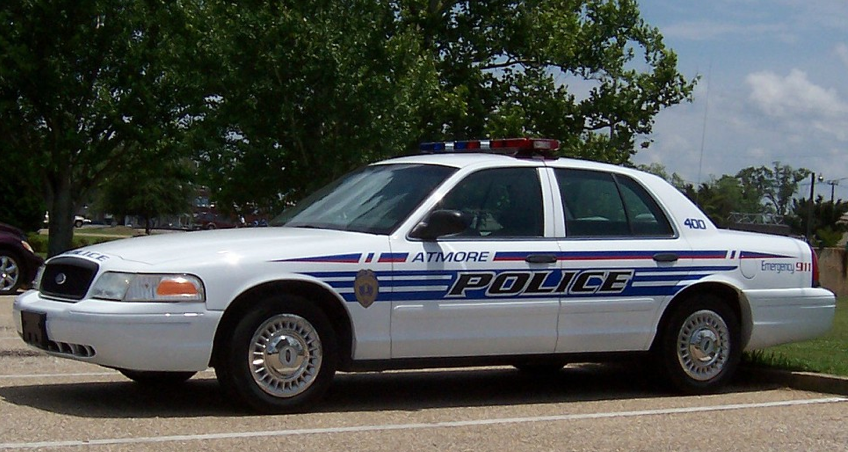 Chad Thrower shared the content below via CopBlock.org/Submit – if you have a moment please give the Atmore police a call and question why they targeted a man who did nothing criminal.

My brother and I recently started walking for exercise the week the incident occurred. We went fairly early in the morning/late at night to avoid the daytime heat, usually between 1:00 am and 4:00 am. I carry my pistol with me for protection. I let my concealed carry permit expire a few months back, so I was carrying the pistol openly, as Alabama law allows.

When we were about approximately three or four blocks from home a police car came up behind us and began following us. He was creeping slowly behind us for about a half a block. He then pulled up near us and asks where are we headed. I respond with, “that’s none of your business.” He gets out of the car, flashlight pointed at my firearm and seemed angry because I refused to answer his question.

At gun point, he orders me to put my hands on the car, takes my pistol, and searched my person after I refused to give consent to a search of my person. He called backup and about five or six other officers soon arrived. They all huddle up and talk awhile. After they finish the same officer returns to me and puts me in handcuffs.

I was told I was under arrest for carrying a concealed weapon without a permit, which is a total fabrication. My pistol was in a holster, my shirt was tucked behind the pistol, and was plainly visible.

Editors Note: If Chad was conceal carrying, as was claimed by Kenneth C. Sessions, how was his firearm spotted? It’d be interesting to read the twisted “facts” of the police report he submitted… Also, to think that one can only carry an item of their own property a certain way (concealed) after gaining permission from others who position themselves as “rulers”, fuels the idea that there are two classes of people, which is not conducive to a free society.

In the future, Chad, and everyone else reading this, is encouraged to always carry a video or audio recording device on their person, and to use to capture an objective record should a police interaction occur.

Alabama is a traditional open carry state. The only thing preventing it from being one of our “Gold Star” open carry states is their prohibition against carrying openly in a vehicle without a permit.