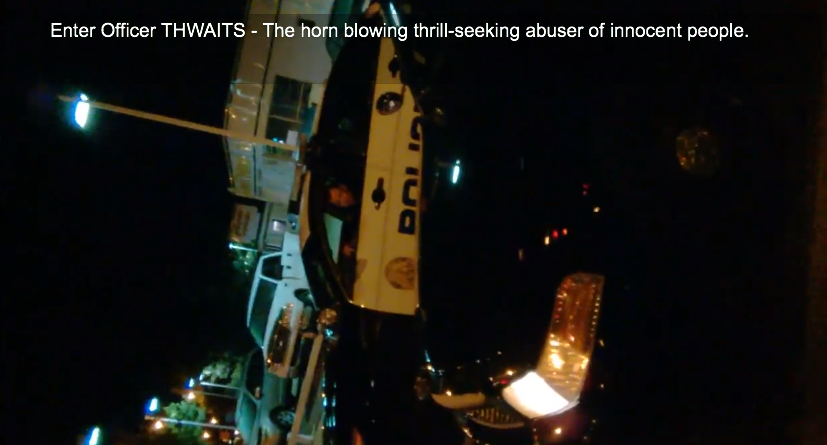 The content below was shared by Eric Brandt via CopBlock.org/Submit. While some viewers may take issue with Brandt’s language and chosen tactics – talking to police employees a bit like Jimmy Justice – as he noted, “The purpose of my protest is to make public the things this department and city would like to obscure from scrutiny.” As we all know, bullies like to operate in the dark, absent the disinfecting light of transparency.

Despite a public decree that abuse of homeless persons will not be tolerated, Westminster, CO police continue to get their jollies by mistreating people who are not committing any crimes. Following reports by area homeless persons that officers are harassing them by blowing horns at them to wake them up at night and then speeding off without a word, Eric Brandt deliberately sleeps on the sidewalk at the busy 72ND and LOWELL intersection with his giant “FUCK COPS” middle finger sign facing up the main drag. Hook, Line and Sinker – corrupt Westminster, CO cops, THWAITS and JURISCHK, ; THWAITS stops 4 times this night, blares his bull-horn and speeds off.

During the 4th harassment Brandt notices JURISCHK in another patrol cruiser holding a camera towards Brandt. Brandt gets up and starts recording. The video here is the way to handle corrupt and stupid cops abusing citizens or fun. Brandt did receive a bogus J-Walking ticket (801(1) – Model Traffic Code – Obstructing Traffic Against Crosswalk Signal) which he expects will be dismissed soon and has filed a motion to compel criminal prosecution on the offending cops for violating various laws and will be suing for civil rights abuses. Notice how differently Brandt deals with the third officer – ROSE who simply complies with the rules and behaves appropriately. Crazed lunatic, calculated citizen investigator (or both)? You decide.

Following almost three years of police abuse by Westminster, Colorado, which includes beatings, a 27-second illegal tasering, evidence tampering, multiple illegal arrests, and warrantless search and seizures of Brandt’s person and home, Eric Brandt asked for an internal investigation. Commander Dean Villano replied that he had no intention of filling in the blanks, so Brandt filled in the blanks for them.

He took sidewalk chalk to a big blank piece of sidewalk in February, 2014 and drew a gigantic upside-down crying pig with a police badge and a puddle of tears with the text “MAKE A PIG WAIL AND YOU’LL GO TO JAIL” – And he did: NINE Westminster, CO police officers cuffed Brandt and booked him into jail on ridiculous charges. Despite Judge Basso refusing to sign the warrantless arrest affidavit and demanding Brandt’s immediate release from jail, Westminster continues 7 months later to try and pursue charges including $17.50 in restitution for 5 gallons of diesel fuel for the fire truck to come clean off the chalk.

Brandt has been arrested for 6 of over 50 sidewalk chalk events and has been arrested 10 times for a gigantic Styrofoam middle finger complete with functioning flip which reads “FUCK COPS”. Brandt travels everywhere with this sign which he has vowed to make bigger every time he is arrested for it. Brandt is represented by David Lane on numerous civil matters to include being drug out of a recent August 11, 2014 City Council Meeting where Mayor Herb Atchison forbade Brandt from delivering a polite, attorney-reviewed speech simply because it might contain information relating to Brandt’s pending law suits.

Brandt has had over 60 police contacts and over 20 arrests in 13 months. Currently, he faces over 20 years in jail for protesting activities in 10 Westminster, CO cases; 1 Adams County, CO case; and 2 Denver, CO cases.

I am Eric Brandt. I spent 8 years in the submarine force with 6 years at sea to defend The Constitution of all enemies, foreign and domestic. I was never absolved of my oath.

I WILL NOT TOLERATE SUBJUGATION!

I WILL NOT BE SILENCED!

Editors Note: Brandt’s actions on video did not cause a victim and thus the ransom note levied at him is without merit – clearly done in an effort to chill his activities.

Brandt noted his motivation to aid the homeless who have been harassed by police employees. Perhaps it could be useful for him to do interviews with them, to give them a voice. Also, instead of just stating that police drove by and honked at the homeless, capturing and sharing those actions could go a long way too.