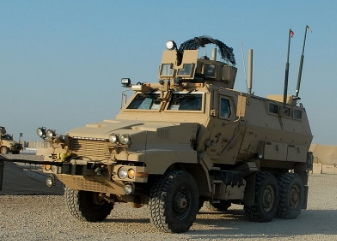 Jason M. Salamat shared this content via CopBlock.org/Submit, which details the ridiculousness of the ‘war on terror’ – in this case, the acquisition of a Mine Resistant Ambus Protected (MRAP) vehicle by police employees at tranquil Saddleback Community College.

This is at a community college in my area. There are less than 10 full-time officers at this location, and only one case of a forced sex offense in 2012. Why do they need an IED/Mine resistant armor vehicle? In-case of terrorist threats or hostage situations? Yeah, right. More like to scare the potheads before they go to class. Ridiculous. Our tax dollars at work.

Editors note: With less than 10 full-timers, the office of the Saddleback Police Outfit is open only a half-day on Friday, and is closed on Saturday and Sunday. Clearly the crime rate must be so astronomical in the area that the need for the MRAP is paramount.

From the write-up Why Does Saddleback College Have an MRAP Armored Vehicle? by Gabriel San Roman:

In fact, the Saddleback Police Outfit now has the distinction of being the only college with less than ten police employees with a MRAP – I bet that distinction is not plastered on literature trying to attract new students…

Perhaps the Saddleback police employees  need to re-read their mission – in doing so, they may come to see what is clear to any rationale person – a MRAP is a ridiculous and unwarranted.

The MRAP at Saddleback Community College joins the 40+ others now in California, as of June 13, 2014

MRAP Distribution within USSA by CopBlock