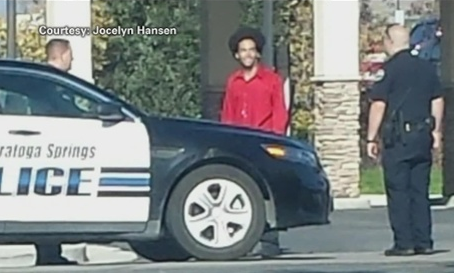 Tony Ekins shared this content via CopBlock.org/Submit about 22-year-old Darrien Hunt who was shot and killed by still-unidentified men wearing badges of the Saratoga Springs, UT police department.

This is a case involving rural Utah town where police once again gun down a man wearing a sword on his back. Police said he lunged at them with his sword. But autopsy shows he was shot in the back running from police.

When his mother went to identify his body, the police declined and said to her, “the body is brown with an afro.” Definitely worth looking into and sharing with the stop-police-brutality network.

I live in Utah and these guys are going to get away with it if we don’t come together and let them police know we are here to protect our rights.

A write-up about the incident by Brian West and Nkoyo Iyamba at KSL.com noted:

Randall Edwards, an attorney for the Hunt family, said Saturday that an independent autopsy was performed at the family’s request. He says it shows that Darrien Hunt was shot “numerous times, all from the rear.”

“This is consistent with statements made by witnesses on the scene, who report that Darrien was shot to death while running away from police,” Edwards said in a statement. “It would appear difficult, if not impossible, to reconcile these facts with a story that Darrien was lunging toward the officers when he was shot.”

Supposedly, the Utah County Officer Involved Shooting Protocol Team is leading an independent investigation – but how unbiased can an investigation be from those folks, who, like the killers, subsist on stolen money and perceived legitimacy?

Also, as was disclosed on September 16th – six days after the shooting death of Darrian, those involved haven’t even been interviewed by investigators. What a joke!

From a write-up on TheGuardian.com by Jon Swaine:

After several days of silence Tim Taylor, the chief deputy attorney for Utah county, said in a statement on Saturday: “When the officers made contact with Mr Hunt, he brandished the sword and lunged toward the officers with the sword, at which time Mr Hunt was shot.”

However, Taylor confirmed to the Guardian on Monday that Hunt was in fact alleged to have lunged at the officers outside a bank several dozen yards away from where he ultimately died. While it was outside the bank that Hunt was first “shot at” by police, Taylor said, it was not clear whether he was struck on that occasion.

Hunt then headed north and was shot several more times before eventually collapsing outside the Panda Express, according to Taylor. He said it was not clear if there were any further threatening moves. “Whether or not the individual lunged again at point two, the other location, I don’t know about that,” Taylor said.

Randall Edwards, an attorney for Hunt’s family, said in an email late on Monday: “This appears to be a major change in the official story”.

Edwards said over the weekend that the family’s private autopsy had found Hunt was shot six times from behind. He was hit once in a shoulder, once in the back, once in an elbow, twice in a leg and once in a hand, according to the attorney.

“The shot that killed Darrien, which was straight in the back, did not have an exit wound,” Edwards told the Guardian. “It raises the question as to how you can lunge at someone and be shot in the back at the same time.”

If you were in the area during the time of the incident and witnessed, or captured any of the scenes that unfolded, please step forward.

Or, if you work with the triggermen and have information that hasn’t yet been made public, do the right thing. You know, if Darrien were your son, you’d seek accountability.