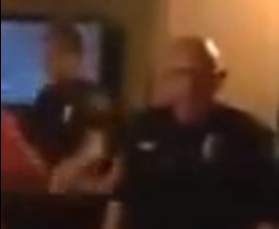 Daniel T shared the information and video below via CopBlock.org/Submit – it documents a gang of men violating the property rights and individual rights of others inside a dwelling. Will they be held accountable?

Police bust an Iowa City, IA party using excessive force and unwarranted entry. Police arrested one individual in the house using excessive force and pepper spraying him while he was in handcuffs. Tazers were drawn and pointed at innocent and compliant guests. Also others were arrested outside the party for public intoxication after being forced to leave from the house. A disorderly house party ticket was issued to the homeowners when it was only a small gathering of 10-15 people.

Iowa City, Iowa — Free Johnson County, a local grassroots group, announces a public campaign seeking to provide transparency and justice for all the parties involved in the incident that transpired between the Iowa City police and the occupants of apartment #1 at 40 S. Johnson St. on early morning of September 6th, 2014.

This effort is in coordination with Mr. Robert Smith, an Iowa City resident whose video recording of the event was uploaded to YouTube later the same day, and since then accumulated over 15,000 views.

On September 9th, in response to the public pressure generated by the video, the Iowa City Police Department published a press release named “Disorderly House Investigation,” purporting to clarify the recorded event and address some of the public’s concerns.

Among other things, the ICPD press release claims that:

a) The video recording of the incident made by Mr. Smith covers only “a brief portion of the interaction.”
b) “…the occupants of the residence refused to respond to the door.”
c) “When the door eventually opened, the occupants denied taking ownership or responsibility for the apartment.”
d) “The resistive behavior that was initiated outside of the residence then carried over into the inside of the residence.”
e) The enforcement actions of the police were authorized under the Iowa City “Disorderly House ordinance” (section 8–5–5).

The following rebuttal of the ICPD press release is being presented at Mr. Smith’s request. Mr. Smith, being present before, during, and after this incident, states that:

a) His video recording starts immediately after the door was fully opened to the officers.
b) The amount of time from the first knock to the opening of the door was measured in seconds, approximately 10–15 seconds in total; this calls into question the definition of “refusal to respond” the ICPD used in their statement. Clarification regarding how long a citizen may take to respond to the police knocking on their own door is needed.
c) As is clear from the video, questions such as “Who is responsible for this residence?” or “Where is the owner?” were not asked at any point in a way which could have been heard by responsible parties.
d) Mr. Smith’s video clearly depicts Mr. Wilson standing calmly inside of the residence, until the fifth second of the recording. At no point do we see him outside of the residence as referenced in the Department’s statement. When he is ordered to leave, he turns to set his alcoholic beverage on the mantel. At this point, he is grabbed by officer #97, and only when a Taser is produced does he pull away.
e) The ICPD fails to note in their report that they possessed neither a warrant, nor permission to enter the residence — in fact, the occupants attempted to invoke their fourth amendment rights by stating that “You’re not allowed in this door” to which the police responded “We’re already in here.” The City Code clearly states that the power to evict persons from a residence under the Disorderly House ordinance comes into effect only “upon issuance of a criminal complaint” — therefore, the attempt to eject Mr. Wilson seems to have been without cause, especially when we refer back to the ICPD press release, which states: “After the incident was eventually calmed, one of the tenants of the residence was identified and later charged with Disorderly House.” Not even an announcement to the party goers that a disorderly house ticket was being issued to the residence at large has ever been made.

In addition to the named discrepancies between the police press release and Mr. Smith’s video recording / verbal testimony, the press release fails to mention an apparent assault on Mr. Smith by Officer #97, who is shown attempting to knock the camera phone out of Mr. Smith’s hand. A representative of Free Johnson County contacted ICPD’s Lt. Campbell to obtain a comment on the Department’s policy regarding citizens’ first amendment right to film the police, and was met with a thinly veiled threat to be taken into custody, apparently for attempting to continue to film the interaction. After the camera was turned off, he was told that not only could the phone in Mr. Smith’s hand have been mistaken for a traditional weapon, but that it also could have been a stealth weapon, possibly hiding a Taser or a knife.

It is obvious that not only was an ordinary, peaceful situation turned into a highly charged confrontation where all parties were unquestionably on edge, but that there are serious discrepancies between the dueling accounts.

That’s why, in the pursuit of full transparency and justice, Mr. Smith is calling for the immediate release of all the audio and video recordings of the incident.

Additional video testimony from Mr. Smith has been released simultaneously with this press release and is publicly available at: