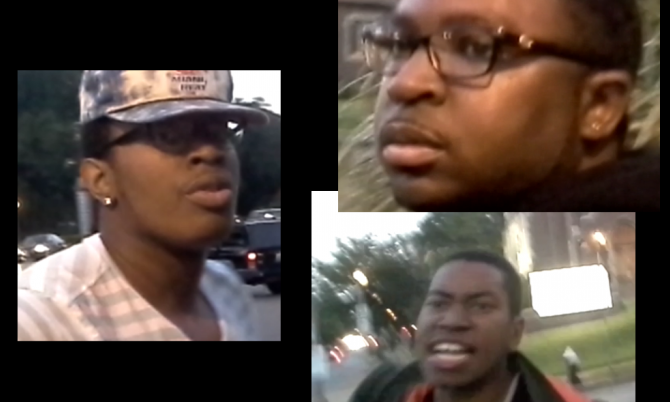 The video and text below were shared anonymously via CopBlock.org/Submit by an individual who, along with another present, took it upon himself to call-out a few men actively initiating force against a woman. It documents that heroism is not contingent on ones’ place of work. Also, that bullies of all stripes prefer their actions not be made transparent.

Though the videographer encourages those with more information to contact the St. Louis Police Outfit, an alternative to consider, is St. Louis Cop Block.

This video is of the incident the police were responding to, not of the police themselves. My primary concern is still for the safety of the victim in the backseat of this car, not with reporting on the police. However, the police have demonstrated very little action on this case, and I want to spread this video as much as possible in the interest of protecting the woman in the vehicle by finding her kidnappers.

The police HAVE NOT requested the video footage of either of the witnesses who filmed the attack, and they said the case had “taken a ticket” and would have to wait its turn after the detectives returned to work in the morning. The police who arrived several minutes after the incident was over were very polite and did not harass anyone on the scene. They requested details from several witnesses and watched the video footage from both phone, but they DID NOT pursue the kidnappers, and only one squad car ever arrived. We were only questioned for about fifteen minutes before the police were done with their investigation.

Below is the account I’ve been sharing with the video and photos:

At 7:13 pm on Thursday, September 18, 2014, my partner and I were walking south on South Grand Blvd. in St. Louis, and we observed a white Chevy Blazer (license plate EG8T3M) at the Pestalozzi St. intersection with both its back doors open and two black males blocking the open doors. A woman was trapped inside the car, and at least one of the males was punching her. One was wearing a white and blue baseball cap, black glasses, white earrings, a silver watch, a T-shirt with white and blue-green stripes, black shorts, and white tennis shoes with short black socks. The other man was wearing black glasses, white earrings, a black watch, a black hooded sweatshirt with large red letters on the front, blue jeans, and white sneakers. One of the males yelled into the car, “Bitch, I will kill you.” After we crossed the street, we doubled back, and I began filming the vehicle while my partner called the police. After about 30 seconds of filming, the men saw us and became confrontational, pointing to the camera and insisting that I “put it up.” One man approached me until I had to hold him back with one arm. After another 30 seconds, after being held in the car by a passenger wearing red shoes, another young black man left the back seat of the SUV, punched the person inside who had restrained him, and ran toward me yelling “Get that motherfucker” and “Put that camera down!” This third assailant was wearing a green jacket, a black shirt with large white lettering, light brown pants, and black shoes.

I didn’t put the camera down.

Two of the men continued to try to intimidate me for another minute while I told them to back up and my partner finished her call with the police. One of the men returned to the car. About two minutes and 30 seconds into the incident, they began retreating back to the car while the man still at the car yelled into it, “Get the fuck out! Get out!” Just ten seconds later, the two men who had been retreating saw that I was still filming and yelled, “Lose the camera, man!” and began to rush me. They aggressively pushed me back from being able to film the vehicle and attempted to take the camera. The third rejoined them, and the three of them began to surround my partner and me. Approximately three minutes and 20 seconds into the incident, the men began to assault me with punches and grabs for the camera, scraping my neck in the process but otherwise failing to land their attacks. Ten seconds later, my partner pepper sprayed the assailant in the striped shirt, and all three retreated immediately.

Once they were back in the car, they drove across South Grand Blvd. and into Tower Grove Park. The victim was presumably still in the back seat. There were at least six witnesses of the incident, and no one reported seeing the backseat passenger escape. There are at least two video records of the incident.

If you recognize anyone or any clues in the accompanying pictures, please call the St. Louis Police Department’s 3rd District at (314) 444-2500 with your information. The person who was in the back of the car may still be in danger.